The best theatre shows this week: Let the Right One In opens

Vampires, voyages and new beginnings on the Irish stage 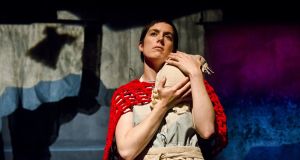 Moonfish Theatre’s ‘Star of the Sea’ continues its own voyage, following its 2014 debut at the Galway Arts Festival

Star of the Sea
Riverbank Arts Centre. Nov 18, 7.30pm. riverbank.ie; An Grianán, Letterkenny, Nov 21. angrianan.com; Hawk’s Well Theatre, Sligo, Nov 23. hawkswell.com
Moonfish Theatre’s imaginative and sensitive adaptation of Joseph O’Connor’s novel continues its own voyage, following its 2014 debut at the Galway Arts Festival, and conducting another well-deserved tour. Fluently bilingual and deeply considered aesthetically, the production centres on the course of an 1847 Famine ship, whose passengers – a maid, a ruined lord, a murderer – drag with them the trials of Ireland towards the new world. Their stories, separate and entwined, are realised through a series of flashbacks and accompanied with a graceful design of projections, music, movement and live sound effects: there is a great pleasure in witnessing its construction. Although freely adapted by the cast, the production is reverential to the novel, including as many plot lines as possible, sometimes at the expense of emotional investment – a novel can ration out pathos more evenly than two hours stage time. But the suppleness of its creation is the real star here, and it makes for an engaging and thoughtful depiction of a fateful journey.

From Eden
Pavilion Theatre, Dún Laoghaire. Nov 19, 8pm. €16/€14. paviliontheatre.ie
Beginnings always have such promise, no mater how disappointing their endings. This little rehearsal of human hope happens regularly at the end of each year and the beginning of the next, and certainly among the misguided few still trying to have the Best New Year’s Ever, while saddled with the internal audit of the closing year’s profits and losses.

Stephen Jones’s debut play, which premiered at Theatre Upstairs in 2015 and went on to scoop a Stuart Parker Trust/BBC NI Radio Drama Award, started strong itself, and is still ascending, revived once again for a limited tour culminating here in the Pavilion just as the year begins to wind down. In a house named Eden, two strangers, Alan and Eva (Jones and the luminescent Can’t Cope Won’t Cope star Seána Kerslake), both damaged souls, barricade themselves into a bathroom to avoid the mandatory cheer of Auld Lang Syne, and come to discover each other. Directed by Karl Shiels, it has the bruised hope of a second chance, or as the title suggests, an offer to begin again.

It’s hard enough being Oskar, a bullied, lonely and underprivileged young teenager, but a spate of sinister killings in the neighbourhood, in which victims have been slaughtered like pigs and drained of their blood, can really cramp your style. A young girl, Eli, has moved in next door in his estate, never in school, never seen in the daylight and astonishingly impervious to the Swedish winter. The pair soon form an inextricable bond, but the bonds of devotion to Eli come with some very significant consequences.

Adapted from John Ajvide Lindqvist’s novel, and its entrancing film version, Jack Thorne’s stage treatment for the National Theatre of Scotland retains the original’s uncanny poise, aided in no small part by John Tiffany’s imaginative and imagistic direction. Now it comes to the Abbey with an all-Irish cast, featuring Craig Connolly as the struggling, kind-hearted boy and Katie Honan as his kindred spirit and protector. It’s an unusual coming-of-age story, as touching as it is chilling, about the things we do for love.