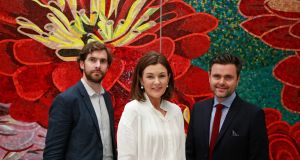 TileStyle has been announced as the new Associate Partner of The Irish Times Irish Theatre Awards.

The deal will see the company sponsor the competition for at least three years. The announcement was made in TileStyle’s headquarters in Ballymount, Dublin 24.

“Design, innovation and creativity are core to TileStyle’s ethos and we align ourselves and our brand with others who share those values,” said Gerard McNaughton, the retail director of TileStyle. “The Irish Times Irish Theatre Awards celebrate those very things, talk about them and allow us to take a little time to reflect on them.

“Theatre in Ireland is constantly reinventing itself, challenging itself and developing and growing. And through it we encounter a boundless energy in many forms that we at TileStyle love. The Awards allow us to recognise the very best in theatre each year and TileStyle very much look forward to engaging with this new partnership and the mutual benefit it will bring both organisations.”

Among the other arts organisations that TileStyle supports are Business to Arts, the National Concert Hall and ReCreate.

Laurence Mackin, Arts Editor of The Irish Times, said: “TileStyle has a fine history of supporting the arts in Ireland. Too often we say that private organisations need to do more to support culture, and this is a terrific example of just that.

“The Theatre Awards are only able to happen each year because of collaborations, enthusiasm and help from the entire sector. The support of a company such as TileStyle throughout the year-long process is a huge boost for us, and for the sector. And it means that The Irish Times Irish Theatre Awards is on a secure footing for the near future.”

The Irish Times Irish Theatre Awards celebrate the best performances and productions in the Irish theatre industry. The awards have been running for 20 years, and among those who have picked up awards at various stages of their careers are Ruth Negga, Tom Vaughan-Lawlor, Cillian Murphy, Conleth Hill, Fiona Shaw and Charlie Murphy.

Each year The Irish Times selects three judges who visit hundreds of shows across the country. They select shortlists across a variety of categories, which are announced in January, followed by an awards ceremony in late February/early March. The judges for the 2017 Awards are arts broadcaster Catríona Crowe, arts journalist and researcher Paula Shields, and Ella Daly of Dublin Youth Theatre.

TileStyle is an Irish family-run business that was set up in January 1982 by the late Jim McNaughton. What started as a small ceramic tile business is now one of the most successful tile, bathroom, wood flooring and natural stone suppliers in Ireland today.