How should we respond when a man we like is accused of harassment?

Opinion: I loved Michael Colgan. Power can be wielded with kindness as well as threats 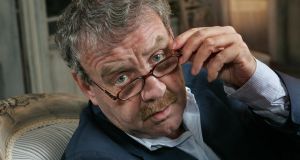 Michael Colgan, the former director of the Gate Theatre, in 2008. Photograph: Matt Kavanagh

This post-Weinstein moment is, as the feminist writer Rebecca Traister has remarked, “some renegade ’70s-era feminist shit going on. I’ve never lived through anything like it.” Me neither.

We’re watching goliaths fall, battalions of women with slingshots firing back – finally. And there’s a pleasure in watching the colossus stumble, isn’t there? Take him down, ladies, I thought as the allegations against Harvey Weinstein mounted; sing it, I cheered, as women shared stories of theatre director Max Stafford-Clark; likewise as young men came forward to confront Kevin Spacey.

Michael Colgan ran Dublin’s Gate theatre for 33 years and was, until his retirement last year, probably the most powerful man in Irish theatre. Now he’s facing allegations of sexual harassment and bullying from women in the Irish arts. He is accused of frequent inappropriate touching and sexualised comments.

In an article published on Sunday, he apologised to anyone he might have hurt, while also casting the alleged harassment – unhelpfully, some victims feel – as a failure to distinguish between his personal and professional life.

In contrast to the way I responded to other allegations, my reaction to playwright Grace Dyas’s original blogpost alleging harassment by Colgan was far from gleeful. I believed her.

I waited for more women’s stories to follow. As they emerged, I kept meaning to express my support on social media – to thank them for their feminist work. But for about a week, I couldn’t bring myself to do so.

I worked at the bar in the Gate for two years and I just loved Colgan. The women who have spoken to the Irish media tell tales of his hand eternally resting uncomfortably on their lower backs, ever at risk of sliding towards their bottoms. I am not surprised by these allegations, because that kind of behaviour was absolutely characteristic of boozy opening nights at the Gate.

I don’t think that anyone who has worked at the theatre could honestly say they were surprised.

Yet Colgan was exceptionally kind to me. And I suppose that this is one way such people keep their power in place: by bestowing kindness and favour on some women, building up networks of affection and loyalty, while bullying and harassing others. I’m not saying this is an intentional strategy, it’s more like the messy human aspect of it all.

Colgan used to call me “the blue stocking” and sit down to discuss poetry with me at the bar while ignoring the ambassador of somewhere or other and his wife because they were boring. With crowds of important Irish luvvies looking on, he dragged me out from behind half-pulled pints to introduce me to Brian Friel, and told him that I’d just won a scholarship to study theatre in London.

This wasn’t an ostentatious kind of anti-snobbery either. It was (as far as I could see) just him – interested in people, interested in ideas, completely anarchic when it came to social hierarchies or etiquette. He was very protective of his staff in some ways – always taking the coffee lady’s side over some bigwig drinking champers. That said, his wildly inappropriate behaviour was common knowledge at the theatre.

I didn’t have the politics then that I have now, and maybe if I had, my warm memories of the Gate would be different. Here’s the thing, though – Colgan is alleged to have been abusive and misogynistic, and I believe those allegations, yet he is also charming, fun, and in many ways an extraordinary person.

I don’t want to mitigate the impact of misogyny here; rather, I’m trying to trace the emotional architecture of patriarchy. I never stopped to consider that Weinstein was probably genuinely lovely to lots of women. I scoffed at Lindsay Lohan saying she feels sad for Weinstein.

Colgan hasn’t been accused of anything that equates with Weinstein. But I do feel sad for him, even if he’s getting a comeuppance he deserves.

In trying to puzzle out how abusive men gain power and hang on to it, it’s tempting to focus on intimidation tactics: macho posturing, aggression. But reflecting on how I ignore the misogynies of men I like, I realise that kindness, affection and loyalty are stronger glue than fear.

What do we do with our loyalty when men we care about are accused, when we are, after a fashion, accused ourselves of seeing and doing nothing? Is it our feminist duty to betray the genuine bonds that tangle us up in systems of oppression? Or, to put it more viscerally: are we really going to look at a man who gave us a hand up and kick him when he’s down?

When victims speak out, they’re not just confronting one man

We’ve all got our own moral compass (some in better working order than others, clearly). I don’t think there can be a simple imperative in these situations. But maybe there is a duty to remember that power isn’t all threats and tantrums; it’s also friendship and poetry.

When victims speak out, they’re not just confronting one man. Often they’re facing an entire community of people who have affection for that man – many of them women. That must be petrifying.

And knowing that, you’ve got to have crazy respect for those who dare to tear through layers of love and loyalty, through palimpsests of doubt and shame, to reveal the poison at the very heart of the thing.

A blow-by-blow guide to the Easter Rising
10