Sinéad Gleeson: Rediscovering the shared frequency of music and writing

The writer on creating a world for a new album by her husband’s band, Mount Alaska 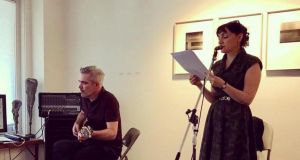 My husband says he has a proposal for me. That he wants my help. I am in the middle of a year of all kinds of mayhem – my debut book has been published, I’m editing an anthology of 100 stories, I take a job teaching in a university, and various other freelance things. There is also the matter of us parenting our children, which we enact with the co-ordination of synchronised swimmers.

Because of this busyness, I have spent most of this year hoping no one will ask me to do anything ever again.

A proposal is, I think, not really a word I want to hear, especially as this is the week my book is due to be published.

But because I’m eternally curious, or plain nosey, I give in.

I act nonchalant and ask what it is.

He is a musician, my husband. A composer. A sound engineer who produces other people’s albums. He fixes the vocal weaknesses of singers who have off days, adds strings when a band can’t afford a real quartet. Sometimes he is asked to remix songs, the musical equivalent of sexing up a dossier, adding BPMs or atmosphere where there was previously none. When he is not doing this, his daytime job, he makes music with Cillian McDonnell under the name Mount Alaska. For the last two years they’ve been working on a new album, and because the recording studio is at the end of our garden, I feel like I’ve been there for every note and WAV of it. The building is soundproofed, but I’ve heard slivers seep out when the door is opened on coffee breaks or in the summer when I hang out washing. Sometimes I can hear him working all day on just one section, the same set of notes . . . constantly tweaked, rearranged. There’s something of Beckett in this repetition, the musical equivalent of going round in circles to find something new on each circuit.

But it’s also about the craft.

I know this. It’s a reminder of writing days when the word count is lower at the end of the day than at the start. Backspacing the same sentence over and over because it’s just not right. Trying to make one paragraph work in the hope that the whole of the thing you’re trying to create will assemble itself. Like Frankenstein’s monster, you will it to come alive.

Outside of the actual members of Mount Alaska, I’ve heard the songs more than anyone, from tentative drafts to the now finished versions. I am so familiar with their sound that I don’t know where to start with describing it. But I’m meant to be all about words, right? So l listen to the disordered scraps in the garden, a kind of eavesdropping, and hear notes of Jóhann Jóhannsson, Ólafur Arnalds, Amiina, Jon Hopkins, Philip Glass. When the album is a complete thing, I will listen again, for what the songs sound like, not who they remind me of.

It turns out, this proposal, is to do with words.

But I am in a creative slump. I have managed to write only two short things this year, both commissions, because time and headspace are elusive when you have too many things on the go. And here, suddenly, is a third commission. A kind of collaboration. We have collaborated before. Stephen has created music and sound design for some of my writing. There is the essay about my grandmother and her life in tenements; of how she used to see the ghost of her dead father, which he managed to make into something both atmospheric and tender. He found a way into my world of words, but how do I offer him something in return? I can’t play any musical instruments, I only sing if I’m badgered by relatives at family dos and am not sure that years of buying and writing about music will be enough of a basis to pull it off.

When I was a journalist, the people I interviewed the most were musicians and writers. I once asked Conor O’Brien from Villagers if he’d consider writing fiction because his songs sound (to me) like short stories. His response was that he could only write lyrics once he had the music, and that the two were inextricable; the words would not work without the music. I still think the world is missing out on his novel.

It wasn’t until Constellations was published that I realised it is a book full of music. How songs and albums have catalogued various parts of my life, helping to pass the time spent in hospital, to numbly choosing songs for funerals, bringing our children to their first gigs. Music has been a source of distraction, solace and remembrance. Other people tell you what your work is about, and many people asked about songs in the book. A handful have also chosen Into My Arms by Nick Cave for the funeral of someone whose death left them heartbroken. I recently did one interview that focused solely on the music in Constellations, and a moderator at a literary festival pointed out that the title of the first anthology I edited is a line from a song (Silver Threads of Hope by Adrian Crowley). All the connections start to manifest, so I turn back towards music.

Tell me about the proposal, I hear myself say.

Mount Alaska have a new album coming out in November, with a very specific concept: they’ve written a soundtrack for a TV series that doesn’t exist. It’s a ghost score in a way. A soundtrack for a place and people that don’t exist (isn’t all art created by blanking out the eventual reader/listener/viewer?). Stephen and Cillian have been trying to come up with song titles, but nothing seems to fit. Before I’ve even listened to it, I loan Cillian a copy of An Sanasán Uisce, or The Water Glossary, by Irish artist Carol Anne Connolly, who created her own micro-dictionary for water-related words: sea, bogs, weather. It is charming in its specificity and playfulness, and includes words like teannaire, which means “the roaring of the sea in a cave”, and teasgal – “a singing wind in a storm”. I realise afterwards that many of the words relate to sound.

They admire it but want new words, something created specifically by what the songs themselves emit.

I press play and listen, and try to imagine where these songs take place. The setting, real or imagined, of where it might be, what the weather is like, who lives there. I listen on buses and on the school run, on trains when I go to read at festivals, at night when it’s dark and the world has dialled down. And slowly it begins to reveal itself, the world of these songs.

I listened to it in the way I used to when I was a music journalist reviewing albums. You layer and layer each listen, noticing a new note each time, an unexpected chord change, a – wait, is that an Omnichord? – way of immersion. Immersion: a word I always use to explain what’s required at the start of a new piece of writing. Of how it has to be you and text, the text and you and nothing else if you manage it. So I listen, and relisten.

The world of these songs, I decide, sounds remote; a place of seasonal reliance. I become convinced it is an island. Maybe in Japan, or Scotland, or off the west coast of Ireland. It is cold, and prone to inclement weather. The compositions make me think of the sea, isobars, landscape, the weather, ice, and maps. Perhaps this location is uninhabited, but every TV show, even fake ones, needs characters. Sometimes I see a man, in this lonely place, or a woman. Sometimes it’s a sea creature, reminding me ofLeslie Jamison’s essay 52 Blue about the world’s loneliest whale, who emits a frequency so singular no other whale can hear it and he roams the depths alone.

I take many notes; write words down and then scribble them out. The songs make me think of looking at the horizon, but not necessarily wishing to be elsewhere. Of being curious about what – or who – might be out there, but not bound by it. It could be about beginnings, or endings. In its cadences I hear the shorthand of all experience: uncertainty spliced with hope.

One of the songs sounds like it should be called Wave Atlas, and probably the album too. Other titles show up, and I hope that they convey in words what Mount Alaska are trying to make the music convey.

I email them my suggestions on the day of my book launch, and they say they’re happy.

Wave Atlas it is.

I’m relieved, but actually . . . sort of grateful. Undertaking this was a reminder of how creativity needs a deadline, and how you can make all sorts of excuses not to write, not to make music, or draw, or live. Music and writing are not disparate. The intersections of word and sound are natural; they are often political and necessary. Sometimes one is a whale under the waves calling out to the other on a shared frequency.

Wave Atlas: Season One by Mount Alaska is out now on 251 Records. They play The Fumbally Stables, Dublin tonight and The Roundy, Cork on Saturday, Dec 7th. Constellations by Sinéad Gleeson is published by Picador.