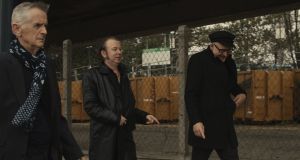 The boat cuts along the swirling Garonne towards the Cité du Vin. En route: the Bourse as a badge of a bourgeois town. Invisible from the quayside is the wave-lapped wharf, worn with industrial muscle memory below the waterline. The modern architecture of the wine museum looms just out of town, like the Starship Enterprise flung from the cosmos to land intact on the river bank.

Thomas Jefferson paid a flying visit to Bordeaux while he was getting his thoughts in order in France. The auditorium we are heading to for an album launch is named after him.

Videographer Killian Ginnity aims his camera at a guy at the bow of the boat. He takes a guitar from his case and a personalised plectrum that declares his name. It’s Eamonn Dowd. He plays down the photo opportunity as he tunes up. And growls a verse: “We were carried/ On a crimson tide/ Over fields that once were green…”

The discoloured Garonne’s riverbed has been churned with heavy rain. Crocodiles in the river glare at us maliciously – each disguised as driftwood trees torn by stormy weather, lost and lurking midstream. The river is a fast flow of muddy waters.

Horslip Eamon Carr has no coat and needs the elements to be kind. This feels like the splendidly low-level act of three scruff European ambassadors as we trek to the heart of official France, invited via Lynne Coyle of O’Briens, to perform in the Cité du Vin, the cultural HQ of the world’s most famous wine region. “We are the DIY diplomats,” I say to Carr. A deep breath of the Medoc air: we will be fine.

Under my arm is a large card envelope. In a world where tickets are the shape of credit cards and those cards are being replaced by digital iterations, we ditched metric. The envelope is one-foot square and contains Eamonn Dowd and the Racketeers’ latest release: Songs from the Fever Ship. This is the vinyl but, in addition to the CD, there’s a cassette too. For music has its own muscle memory.

Back at the start of 2018, Carr’s words began to flow. He was excavating old notebooks and some lyrics intended for Horslips songs in the 1970s. He found poetry fragments. Still a Horslips member but no longer enthusiastic about going out on the road, he wanted to write new songs.

One night in 2015, for a gig in Dublin’s Leeson Lounge, Dowd flew over from his home in Gothenberg, Sweden, to play with his Dublin sleeper band The Racketeers (Al Cowan was on drums back then but Anthony D’Arcy has since replaced him). I had mentioned to Carr he should come to the gig. The two had not met for years, not since the rise and demise of Dowd’s earlier band The Swinging Swine whom Carr and musical project partner Robbie Foy had been interested in managing in the late 1980s. Watches resynchronised, Carr and Dowd began to explore writing songs together. Those songs grew into a round dozen. The perfect shape of a long-playing record.

June 2018. Morning. Les Keye’s Arad studio just off the North Strand. A bandaged wrist alleviates Dowd’s touch of carpal tunnel syndrome. Carr is wielding two sticks, having decided to return to the drums. It has been a while. Dowd rates him as the master of the drum roll. The sound is most pleasing as methodically, under Keye’s encouraging control, new tunes get recorded.

In March of 2019, after additional recording and production in Sweden, all are back in the studio. A version of Cú Chulainn’s Lament from the Horslips 1973 The Táin album is deemed a perfect ingredient. Dowd is in full voice. Carr is back on the drums and Jim Lockhart joins them to play flute, tin whistle and Hammond organ on his powerful song. Les Keye is recording once more and also laying down bass. Musical anchorman Ken Whelan is possessed of deft arrangement expertise: he has woven subtle accordion flourishes around the Hammond. He sits in the corner, relishing an accumulation of derisory jokes about his wheezy instrument. The album is now complete.

“We were ragged/ We were broken/ The most wretched ever seen…” While it had been a bit of a late one for us in L’Avant Scene wine bar close to the Marché des Capucins on Friday night, we were not that ragged, broken or wretched as we disembarked the boat and walked in through the foyer of the Cité du Vin a little after noon. Eamon Carr’s words refer to the Wild Geese who left Ireland in the 17th and 18th century for new lives and refuge in Bordeaux. Dubbed the “Wine Geese”, their long-term influence and power in this region is evidenced on many bottle labels: Lynch, Kirwan, Phelan, Barton and McCarthy.

Our contact, the charming Caroline Wolberg, shows us into the Thomas Jefferson auditorium, a steep and impressive performance space with 250 seats. Sound engineer Contant is setting up microphones and stands. Dowd surveys his venue and struggles with a loose guitar strap usually secured with the rubber washer off the ceramic lid of a bottle of Grolsch. He carefully lays out the sheets of Carr’s lyrics where he can see them by his foot. Soundcheck time. Testing, testing. Tone and volume are adjusted and his plaintive, acoustic versions of the new album’s full, electric-band songs fill the auditorium. The lyrics ring out clear. Tales of bones and the dead, of history’s survivors, of the diaspora, of hangmen and the hungry, of dislocation and wistful decay, of crows pecking corpses in a ditch. They are all there in Songs from the Fever Ship.

While the set will be short and sweet, it will be prefaced by a brief reading by Eamon Carr of The Merchants of Bordeaux, the centre piece song of the album. Given my curatorial role and my writing of the CD sleeve notes, I have been invited to cough out an introductory speech to frame the whole event. In French. I lived in Paris for four years in the 1990s but… merde!

The idea is to launch the album but also suggest a shaking of hands across the centuries. To indicate some symbolic reconnection between 17th and 18th-century Ireland and the heart of official France, between three DIY Irish diplomats and the ghosts of the Wine Geese diaspora. In a time of harsh borders and dangerous sea journeys, I invite the audience to dwell on anyone forced out at any time from anywhere. In the dark of the auditorium, the image of Cú Chulainn locked as human cargo below deck grows as the most tragic of laments. I hold up Dowd’s record sleeve with its image of a ship emerging from fog. And then hand over to Carr. He delivers some apposite Irish couplets before reading his lyrics: “And when the geese were flying/ With no fixed place to go/ There came a welcome promise/From a land where hope could grow.”

Next Dowd comes out on stage. Terse, alone and acoustic, he unveils the epic The Merchants of Bordeaux in all of its seven minutes and 30 seconds, his voice dropping to a whisper for certain solemn parts: “There was no purchase in being valiant/ For your fate would be the same/ As bones that filled the butcher’s pot/ Or the call of the lonely crane.” Then he performs three more songs off the album: Egypt Town, Greenwood Shade and I Never Talk About Her. He tells an anecdote about how many “n”s there should be in Eamon/n. And ends on a huge round of applause.

Benjamin Menouret of Chateau Lynch-Bages is in the audience, along with colleagues from the wine industry. He comes onstage and presents us a bottle of wine. He gets handshakes and a signed copy of Dowd’s album. The audience are invited for a drink in a large glass-walled adjacent room overlooking the Garonne. We meet French and Irish people who have settled in Bordeaux, along with visitors drawn to the museum by its democratic presentation of wine as a demythologised, experiential thing. After the guts of two years of gradual evolution, Songs from the Fever Ship is launched. Chat and laughter echo in the Cité du Vin. We are all empty vessels. Time for a refill.

“So tonight/ Let’s salute that call/A nd let your spirits flow/ We’ll raise a glass and call a toast/ To the merchants of Bordeaux.”

Eamonn Dowd and the Racketeers’ Songs from the Fever Ship featuring Eamon Carr from Horslips is available on vinyl, CD and cassette from eamonndowd.com/music