‘The older I get, my music seems to get faster or more obsessed with speed’ 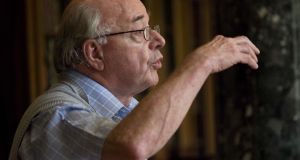 John Kinsella: ‘As I get older my music seems to get faster or more obsessed with speed and continuity and surprises.’

John Kinsella describes his Eleventh Symphony as “another nod in the direction of the great man”. The great man in question is Finnish composer Jean Sibelius (1865-1957), whose seven symphonies, composed between 1899 and 1924, represent one pole of early 20th-century symphonic thought.

Sibelius’s early biographer Karl Ekman quoted the composer’s account of a 1907 meeting with Gustav Mahler. “We grew close during a number of walks when we talked about all kinds of musical problems, of life and of death. When our conversation touched on the nature of the symphony, I said that I admired its style and severity of form, and the profound logic that created an inner connection between all the motifs. This was my experience in the course of my creative work.”

Sibelius reported that “Mahler’s opinion was just the opposite. ‘No!’ he said, ‘the symphony must be like the world. It must be all-embracing.’ ”

Kinsella’s pantheon also includes Beethoven and Bruckner, and his biography on the Contemporary Music Centre website starts with the statement, “ ‘Generally speaking, my style is very bold, but it has not the slightest tendency to subvert any of the constituent elements of art. The prevailing characteristics of my music are passionate expression, intense ardour, rhythmical animation and unexpected turns.’ Quotation: Berlioz. Aspiration: mine.”

Kinsella’s Seventh Symphony of 1999 was written as a homage to Sibelius’s Seventh and references that work’s celebrated use of trombone sonority. Sibelius experienced a creative crisis in the late 1920s and although he worked on an Eighth Symphony and at one point said it was nearly ready for printing it is not known if he actually ever completed it. Sometime in the 1940s he turfed a pile of manuscripts into the fire, sending whatever solid evidence there might have been up in smoke.

Finnish researcher Timo Virtanen uncovered some late orchestral sketches by Sibelius which he believes might have been related to the Eighth Symphony. Kinsella wrote to him, got permission to use them, and “kind of incorporated some of them, or clones of some of them into the new work”. They are, he says, “the basic rock the whole thing grew from”.

He says he’s “taken some of these little snatches and shaped him in different ways. They’re my basic thematic modules in the work. I’ve gone out of the way to feature the sound of solo trombone, you know, which always sticks in my mind. It’s not a solo trombone in Sibelius’s Seventh Symphony, but there’s that great moment where the actual trombone tops everything. And also the glockenspiel out of the Fourth Symphony. These sounds are interwoven into the music at different places. And also, as I’ve done before in my Seventh Symphony, I’ve inserted comments into the argument from the solo viola” – the viola is Kinsella’s own instrument. “So it’s a number of continuous associations between myself and this great man.”

Kinsella is not just the most prolific Irish symphonist of all time, but as long ago as 1990 the subtitle of his Third Symphony, Joie de vivre, expressed a specifically up-beat outlook that bucked against the prevailing emotional trends in 20th-century music.

“As I get older [he’s now 87] my music seems to get faster or more obsessed with speed and continuity and surprises, things like quick changing of dynamics. It’s just the way I want to write, just the way I want to express myself. I always think that, apart from anything else, music should be an entertainment, or should intrigue people in some way or another. Once I get into the piece, I’m just running with it and trying to control it as well. It’s the outcome of pushing and pulling with the material,” he says.

“I find when I’m writing a lengthy work like that, I have this habit once it builds up into something tangible, of reading and re-reading it at the proper speed to see where it brings me, and see do you fall over the cliff-edge. By the end of the process the pages are very weathered, altogether.”

At no point, however, is there any attempt “to sound remotely like Sibelius”.

Kinsella’s music underwent a transformation in the late 1970s, before which he had adopted serial techniques, and would have been seen as a member of the Irish avant-garde. “The things I did at the time I did in the way I wanted to. It took a long time to find some kind of system or language that seemed to give one an ease of working. I went through all the rigours of the 12-tone stuff and that and very much enjoyed it. I was terribly excited about it at the time. I was lucky enough to be involved in computer programming in the sixties, when it was a complete and utter mystery. That, to me, was almost as exciting as writing music.”

He worked with “the first commercial computer that came into the country. I was working in Player Wills at the time.” Two tobacco companies had merged. “They had Players on the north side and Wills on the south side. Some genius got the very far-seeing idea of computerising the merge. It was a matter of putting the various systems that were used in the business on to computers, sales, invoices, that kind of stuff. There were rows of girls all punching up tape. The computer itself was in a very large, air-conditioned room. There were banks of big tape machines running around the wall. The memory capacity was so small that you had to write programs in such a way that they kept clearing the memory and storing the data on a tape. The whole thing was only 8K. You were balancing on a pin.”

I was involved in this amazing thing, the Irish song project by Dáirine Ní Mheadhra

The experience, he says, made him “very rigorous” in the way he works. You can hear the pleasure in his voice as he talks of “the tremendous feeling of achievement after months that you would have written a system that seemed to be without flaws”. And, he adds, “you certainly want to avoid a situation where you’ve written a program which works 99.9 per cent of the time, and then blows up at the wrong moment. That’s the fear. It’s a serious situation.”

Back in the present and away from symphonies, “I was involved in this amazing thing, the Irish song project by Dáirine Ní Mheadhra. That’s an incredible idea, and so efficiently put together.” The Irish Art Song Project/Tionscadal na nAmhrán Ealaíne Gaeilge has commissioned 50 songs in Irish, and created a website where the scores and recordings of the songs are available free of charge for non-commercial use.

“That was a great thrill. I did three songs for that. It brought me back to my Irish, and I realised how singable the language is. I’m not a Gaelgeoir, but I’d love to be fluent in it. This experience was wonderful, to be brought back to it.  I realised when I was trying to set these songs what a beautiful language it was.”

When he left Player Wills, Kinsella moved to RTÉ in 1968, and worked in the music department for 20 years, rising to become head of music. I couldn’t leave him without asking what he thinks of the move of the RTÉ National Symphony Orchestra out of the control of RTÉ and into the control of the National Concert Hall.

He’s actually “quite happy” about it. He refers to the Piano report about orchestral provision back in the 1990s. “It was obvious then that, at some point in the future, either the orchestra would have to be moved out of RTÉ or it would be destroyed. Simply for financial reasons. I’m very glad it is now accepted that the symphony orchestra is an entity that will continue to exist, and it will be truly national then.”

Kinsella is now nearly 30 years older than Sibelius was when he wrote his last symphony. But he shows no signs of stopping. A new symphony is already germinating, though he has no idea yet exactly where it will take him.