Robbie Williams talks about his first Christmas album, why he's not happy with Louis Walsh and how his wife made him a fan of Christmas 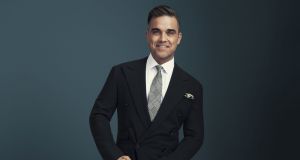 Robbie Williams: I had a panic attack. I was like, ‘I don’t know what to do with this feeling’. Photograph: Hat Trick Productions/Livewire Pictures

In his Wiltshire home, a very tattooed Robbie Williams is talking to me lying on his front in bed, top off, arms propped up on small clouds of pillows. It’s like Christmas has come early for 16-year-old me, even if he is only appearing via FaceTime.

As it happens, Christmas came extra early for Williams, who, if he still needed an introduction, stands as the most successful British artist, if Brit Awards and number one albums are anything to go by.

Despite releasing four albums with Take That and 11 as a solo star, this year is the first in which he’s releasing a Christmas album, a rite of passage in every pop singer’s path. With a mammoth 28 songs and esteemed guests including boxer Tyson Fury, Rod Stewart, Bryan Adams and even his oldest daughter Teddy and dad Peter Conway, The Christmas Present meant that he “got Christmassy on and off for three years – during June, July, whenever it called for it”.

Luckily for him, over time he’s changed from being “in the bah humbug camp” to a fan of Christmas, all thanks to his wife Ayda Field, who joined him as a judge in last year’s British X Factor.

“She’s the spirit of Christmas and she’s sort of a professional memory-maker. She’s incredibly whimsical and incredibly romantic. Christmas was pretty sensational before the kids arrived, but now they’re here, it literally is the icing on top of the Christmas cake,” he says, speaking of their children Teddy (7), Charlie (5) and Coco (1). “I can’t help but get swept up with the fever of the season. I’m in the camp now where the songs can’t get played early enough. The Christmas spirit – I’m totally in.”

I think that being number one on the Christmas singles chart will be out of reach for me. You need to be young and in the pocket of radio and streaming

That’s evident in the album. He’s given a Robbie twist to Christmas classics like Slade’s Merry Xmas Everybody (with Jamie Cullum no less) and Santa Baby, as well as a few specially-penned tracks like Let’s Not Go Shopping, delivered in the big-band tradition. Bookies have Bad Sharon, on which Fury guests, as favourite for Christmas number one, but Williams is cautious about his chances. While he achieved the honour in 2001 with the Nicole Kidman duet Somethin’ Stupid, perhaps the memory of Mr Blobby’s novelty tune snatching it away from Take That’s Babe is burned onto his brain.

“I think that being number one on the Christmas singles chart will be out of reach for me,” he says. “You need to be young and in the pocket of radio and streaming. But I’m a dinosaur in that sense. I’m middle-aged, my fans don’t stream, and the radio stations that used to play me, don’t. I sell physical records still, so the Christmas album number one is really important.”

It’s not a tall order considering his last album, The Heavy Entertainment Show, topped the charts both in the UK and Ireland.

There’s certainly an enduring love affair between Ireland and Robbie Williams, he being one of the few to headline Slane Castle. “Slane holds a special importance to me,” he says. “But so does the Aviva, Phoenix Park, Croke Park – all these places that I’ve had these incredible magic moments with the best audiences in the world.”

I haven’t had a drink for 19 years. New Year’s used to be about even more excess than normal, but now I don’t get involved with the revelry

Given his many visits over, I ask if he’s ever seen Ireland decorated in its Christmas best?

“No, but I’ve been to Ireland at New Year’s. I just don’t remember much of it,” he says, his famous cheeky grin making an overdue appearance.

These days, his New Year’s Eves are a much calmer affair. “Whatever day it falls on – whether that is a Tuesday or Wednesday – it’s just a Tuesday or Wednesday. I haven’t had a drink for 19 years. New Year’s used to be about even more excess than normal, but now I don’t get involved with the revelry. Sometimes we’re in bed before midnight, sometimes we’re not. It’s not something that we even notice.

“I do like getting geared up for January with New Year’s resolutions. I’ve kept to mine this year, to be healthier, and sort out what I eat and how I eat. I would say I’ve 80 per cent completed that resolution. I box, I golf, I eat fish, I limit my splurge on Cadburys . . .”

His 2020 resolutions are about that remaining 20 per cent (“it’s progress, not perfection, and it’s a life’s work”). In his career, he’ll be “veering off in a few different directions than what’s expected”, later hinting that it springs from his time as a judge on the X Factor. While he and Ayda have stepped down as judges, they maintain a close relationship with Simon Cowell and the show.

“I’m going back to promote my song on the show and I’m looking forward to it,” he says. “I had a great time being a judge.”

When people say things about me, I know I’ll have the opportunity to get them back. So I’m not alright with it, but I’m like, ‘right, noted, you’re on the list’

Their presence hasn’t been appreciated by all quarters, however. Louis Walsh recently criticised Ayda’s place on the panel, telling The Sun: “I thought he was a brilliant booking, but then he went and brought his wife on the show. You don’t bring your wife to work.” He then added, “Nicole [Scherzinger] or Sharon [Osbourne] would have been better.”

Williams looks a little upset when I mention it. “When people say things about me, I know I’ll have the opportunity to get them back. So I’m not alright with it, but I’m like, ‘right, noted, you’re on the list’. When it happens to your loved ones . . . I had a panic attack. I was like, ‘I don’t know what to do with this feeling’. It was just uncalled-for and unnecessary. It says something about him. It’s the actions of a feeble man.”

The time comes for him to resume the photoshoot, and I lament the sour ending to our chat.

“It’s alright,” he says, his smile somewhat returning. “It’s great to have opportunities to say he’s a feeble man.”

The Christmas Present is released on November 22nd