Liam Gallagher at 3Arena, Dublin: Everything you need to know 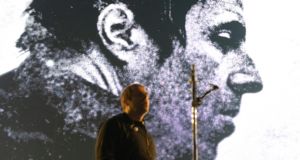 And so it looks as if the runt of the litter has sneaked up behind the top dog and bitten him on the butt. This was never supposed to happen, of course. Noel Gallagher was the primary Beatles-fixated songwriter in Oasis, his younger brother, Liam, the snarling vocalist. When the band split, the former went on to consolidate his career via his High Flying Birds outfit, while the latter formed the mediocre Beady Eye, which soon went belly-up. But the past few years has seen tables turning, with Noel treading water as Liam splashes. With two successful solo albums under his belt – 2017’s As You Were and this year’s Why Me? Why Not – and sold-out shows here and elsewhere, one has to give credit where it’s due.

On Saturday and Sunday evening, at 3Arena in Dublin.

Doors open at 6.30pm. No official set timings have been released, but you can expect the support act to be getting under way after 7pm.

Parking is available in the Point Village car park (you can book through Ticketmaster for €13.85), but better to leave the car at home and use the Luas – get off at the final stop of the red line, the Point. There are usually extra trams on show nights because of the increased demand. The last Luas is scheduled to leave the Point at 12.30am on Saturday and 11.30pm on Sunday.

What will Liam Gallagher play?

If it’s anything like his recent gigs, expect to hear:

Sunday’s show is sold out, but Ticketmaster still has a few tickets for Saturday’s concert. Concertgoers are advised buy tickets from accredited sources only.