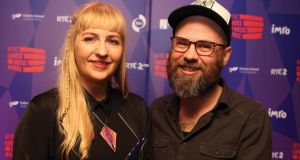 Choice Music Prize: Ships won the Irish album of the year award in March for Precession

This year’s Choice Music Prize winners, Ships, fear they may be left without a roof over their heads when they are forced to leave their accommodation next week.

Sorca McGrath and Simon Cullen, who are partners as well as a musical duo, say that the rental crisis in Dublin has pushed them to the brink and that even attempts to find somewhere to live in the commuting counties around the capital are proving unsuccessful.

“It’s just been a disaster,” McGrath says. “If you look up a house online, there will be up to 5,000 views in an hour. It’s very hard to get a response. Most places won’t even take a call, because if they do they will be bombarded. You send an email and it will go into the abyss.”

This is a situation affecting everyone. I don’t know how the average worker can afford €2,500-€3,000 a month in rent

They aren’t the first high-profile musicians to warn that Dublin’s housing crisis is an existential threat to the city’s artists. In July the songwriter David Kitt said that he would have to leave Dublin after the house he lived in was sold as part of a portfolio to a consortium of investors.

It has been a hugely bitter-sweet year for Ships. On March 8th they were deserved winners of the Choice prize for the year’s best Irish album, for Precession. But just eight days later McGrath lost her close friend Michael Stokes, the 15-year-old who came to prominence on the RTÉ show Room to Improve, who died after a fall.

“I was one of his carers since he was a baby,” she says. “We weren’t blood family, but he was the most important child in my life. I’m still grieving… in a very unpredictable and volatile way. Not knowing where we are going to live, moving away from my support network, compounds the grief and makes it quite frightening.

“It’s been so strange. We won the Choice prize – we had worked really hard and it was lovely. That was the Thursday night. The following Friday, eight days later, Michael had his accident. He was in Temple Street children’s hospital for seven long weeks, in the intensive-care unit. During that time we got the notice to move out.”

McGrath and Cullen currently live in a two-bedroom house in Cabra, paying rent of less than €1,500 a month. Some of their income derives from the studio they operate out of the house, and which is now under threat. They were served with formal notice to leave three months ago, with a deadline of September 29th.

In the short term they expect to have to move in piecemeal with family – which will pose challenges as they try to continue their studio work. They also require somewhere to house their two cats. Barring a miracle in the next week, all four are unlikely to be together under one roof.

“We’ve been through this once already. Four years ago we moved into a place and were told that [the owners] were living abroad and that it would be a long-term let. It felt like a lovely mutual agreement. The rent was reasonable.

“And then the house prices around us started going up. I worried they might look for more rent. They did put up the rent twice. Eventually house prices got extreme – on paper they could be making double what they were.”

Twelve months ago McGrath and Cullen were told the owners were moving back to live in that property. She makes the point that she and Cullen aren’t starving artists living on a pittance. She also works as a play therapist, and they are both in demand as producers and composers for stage and screen. But, even on an average wage, rents in many parts of the city are simply unaffordable.

In other countries, when you take a lease out, it’s often for life. You rent and it’s your home

“We’ve looked all over. When we had to leave our last house we looked in Louth, Kildare. There were some choices. We were lucky enough to find our present house through friends. We’re looking again today – for an average two-bedroom house in a housing estate in Louth you’re paying €1,700-€1,800 a month, to which you have to add the cost of commuting. And very often there just aren’t houses available in Louth, Meath and Kildare.”

Soaring rents are not an issue simply for musicians and other artists, she says. “As creative people we could get away with renting a tiny place if we could afford a very big studio. But affordable studio space is another unicorn. However, I feel this is a situation affecting everyone. I don’t know how the average worker can afford €2,500-€3,000 a month in rent.”

The couple insist they won’t leave Ireland, in the way that Kitt has said he will probably have to. They have built their lives and careers here and are determined to stay. For now they continue to look for accommodation. As for a possible longer-term solution, McGrath believes tenants should have greater protection.

“You look at what other countries do – the long-term-letting situation seems to be a huge factor in people not being shuffled around and house prices going up. In other countries, when you take a lease out, it’s often for life. You rent and it’s your home. The fact you can be moved along in Ireland just encourages this rise in rents.”