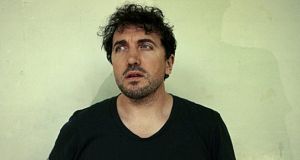 David Kitt: “I do think it is sad that so many creative/artistic/bright people are being forced to leave this city and the country in general.” Photograph: The Irish Times

Singer-songswriter David Kitt is quitting Ireland, claiming it is too expensive to live in the country anymore.

Kitt says he has no choice given that the Dublin house in which he lives is being sold as part of a portfolio to a consortium of European investors.

On his Facebook page, Kitt posted: “It will be sold or rented no doubt to someone working for Amazon on a base salary of 70k while the people who make this city what it is are forced out to the suburbs or to a city (where) they can afford a reasonable quality of life and where their level of income doesn’t make them feel like a complete failure.”

Kitt said he was reluctant to leave Ireland as he feels like “one of the best periods of creativity I’ve lived through in this city having given most of my adult life working my ass off in a profession where those with the power repeatedly fail their own”.

Kitt blamed Fine Gael who he said are “failing this city and its people massively. And Dublin’s heart and soul is being ripped out and sold to the highest bidder.”

He said the same mistakes that were made during the Celtic Tiger are being repeated now: “Have we not learned anything from the last boom and bust cycle? It’s worse than the Celtic Tiger though. And the price is too high in terms of people and culture. It is sickening but nobody seems to be able to do anything about it. It will end in tears.”

I left too, I live in Glasgow now, what's happening in Dublin is heartbreaking

Kitt (43) has produced six studio albums to date. His second album The Big Romance and its follow up Square 1 were number one albums in Ireland.

However, he did not release an album under his own name for almost nine year, releasing The Nightsaver in 2009, and his latest album, Yous,  on January 1st this year.

He joined Tindersticks and then David Gray’s band as a touring member. He also recorded under the name New Jackson, releasing a number of EPs and an album last year.

In an interview with The Irish Times in March, Kitt admitted that he had to do other things in the intervening years because his music was not connecting with the public anymore.

Kitt posted his Facebook message in response to a column in The Irish Times by Una Mullally last week in which she lamented the Government’s fixation on creating an innovation district in the Grand Canal area of Dublin.

Kitt did not reveal where he intends to relocate. In response to his Facebook posting, one person pointed out to Kitt that he was the son of Tom Kitt, and a nephew of Michael Kitt, both of whom had been ministers in the Fianna Fáil-led government blamed for the Celtic Tiger crash.

Kitt described the post as “small-minded”. He responded by stating that his father “spent a lot of his time in the party singing from a different hymn sheet. And I certainly never sang from it myself and my vote for my Dad was a vote for a great man and a great politician, not for FF.”

Kitt said he did not feel particularly sorry for himself as he has chosen a career path that is not particularly lucrative.

He concluded: “Maybe I have to accept it doesn’t have a mass appeal. I’ve always done lots of nixers and odd jobs as well as being a songwriter. But I do think it’s sad that so many creative/artistic/bright people are being forced to leave this city and the country in general.”

* This article was changed on August 1st to clarify that Kitt has released music under the name New Jackson in recent years.