Campaigner also warns of Brexit influx and puts number in ‘serious distress’ at 500,000 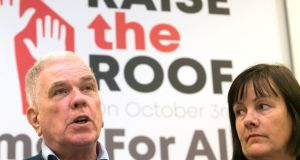 Homelessness campaigner Fr Peter McVerry has insisted that a 12-year-old child could determine that the Government’s housing policy is not working.

The latest homelessness figures, published by the Department of Housing last week, showed the number of homeless children has more than doubled in some parts of the State in the past year, and continues to increase.

The Government has consistently claimed that its policy is working but that it needs time to solve the crisis. However, Minister for Housing Eoghan Murphy has come in for criticism from campaigners and Sinn Fein has tabled a motion of no confidence in him.

Fr McVerry was speaking on Thursday as a coalition of advocates and groups called for a “radical shift” in the State’s housing policy and a “major programme” of public housing construction.

“When the Government keeps telling us that their housing policy is working . . . I think any 12-year-old would turn around and say ‘sorry, the evidence is clearly there that your policies are not working’. The numbers of homeless are going up.”

The Department of Housing’s data shows there were 9,891 people in emergency accommodation during the week of July 23rd to 29th. Fr McVerry said the actual number of homeless is in excess of 15,000.

“There’s a big dispute about whether the homeless numbers will hit 10,000,” he said. “The reality is that it’s probably much closer to 15,000. The figures don’t count people sleeping rough, people sleeping in cars, tents, or couch-surfing.

“If you include them – and they are all genuinely homeless – the figures are way, way above the 15,000.

“Apart from those that are homeless, there are tens of thousands of people, particularly families, living in overcrowded accommodation. You can have three bedroom houses with four generations of the same family living in those houses.

“I would guesstimate, at a very conservative level, that there are half a million people in this country who either have no home or whose housing is causing them serious distress. That has to be a matter of concern for our Government.”

Fr McVerry said matters were “going to get much, much worse” with the influx of foreign workers after Britain exits the European Union.

“The government is expected thousands of employees to relocate from Britain,” he said. “Where are they going to live? The private rental sector. And they will be well paid employees. Rents will go up again and low income families will be forced out.

“The Government has its head in the sand. They don’t have a policy that is actually working.”

The Raise the Roof initiative also involves the Irish Congress of Trade Unions, the National Homeless & Housing Coalition, the National Women’s Council of Ireland, the Union of Students in Ireland, and other civil society groups.

The group is organising a rally outside Leinster House on October 3rd.

DRCC welcomes recommendation for pretrial hearings in sex crime cases 09:31
All sex crime suspects should keep anonymity unless they are convicted, report recommends 07:55
Garda taking too long to set up unit to investigate sex crimes, says expert group 07:00
Ex-solicitors charged with fraud over theft of six-figure sum from banks over 18 months 06:06
No time limits and no pre-booking: what the unpublished pub reopening guidelines reveal 05:51

1 No time limits and no pre-booking: what the unpublished pub reopening guidelines reveal
2 Teenage boy dies at Powerscourt Waterfall in Co Wicklow
3 Gardaí surrender 13 people to Polish police
4 Covid-19 may spread more easily in schools than thought, US report warns
5 Anger in Beirut over missed warnings about ammonium nitrate at port
Real news has value SUBSCRIBE