Occupy Summerhill: ‘We only go to direct action when we need to’ 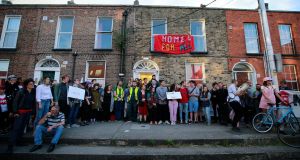 Activists who occupied a property on Summerhill Parade in Dublin have held several demonstrations outside the property, attended by large groups of supporters. Photograph: Nick Bradshaw

Shortly after 7pm on Tuesday, August 7th, a group of housing activists broke into and occupied a property on Summerhill Parade, in north inner-city Dublin. The house had been vacant for three months, after 20 tenants, mostly Brazilians, were told to leave with 24 hours’ notice. This followed a warning from Dublin Fire Brigade, which was concerned about fire safety at the property. A rotating group of volunteers stayed in the house day and night for the past fortnight.

The property is one of six houses on the street that had been vacated in early May. In each one about 20 tenants had been living four to a room, sleeping in cramped bunk beds.

The occupation of the vacant property is the latest protest by the group of activists who call themselves Dublin Central Housing Action. They have pitched themselves against landlords who they believe treat tenants unfairly. Other groups involved in the Summerhill occupation include the student protest group Take Back Trinity and Dublin Renters’ Union. They are all are demanding that Dublin City Council use a compulsory-purchase order to buy the building for social housing.

The court heard the owner had given tenants who had to vacate the properties money to find suitable alternatives, and had tried to find new homes for some of them

This week the protesters were themselves served with a notice to vacate the property by its owner, Pat O’Donnell & Co Ltd Retirement and Death Benefit Plan. The notice warned that if the building were not vacated the company would go to the High Court. The owner installed steel doors on the entrances of the five neighbouring homes on the street that it also owns.

Pat O’Donnell & Co is a plant-machinery and equipment firm, and a long-time sponsor of Clare GAA.

On Thursday PJ O’Donnell, as a trustee of the staff benefit fund, was granted a High Court order requiring the protesters to leave the property by 8am on Friday. More than 30 people associated with the protest were in the courtroom for the hearing, but no one identified themselves as an occupant when called to do so by the court registrar.

The court heard the owner had been renting the properties to several landlords, who were then subletting them. “These persons had allowed excessive numbers of people in the properties,” Julia Lawlor BL, counsel for the owner, told the court.

The court also heard that the owner had given money to tenants who had to vacate the properties, so they could afford to find suitable alternatives, and tried to find new homes for some of them.

Dublin Central Housing Action was formed in 2015, after the occupation of a former homeless hostel on Bolton Street that had been vacant for three years; the occupiers demanded it be reopened. They have come into the public eye in recent months, during several high-profile clashes with landlords over illegal evictions and overcrowded housing.

Michelle Connolly got involved with the group shortly after the Bolton Street occupation; she mainly helps with administration, media and organising work.

The group runs a support service for tenants once a week, when people having difficulties with housing issues or their landlords can get advice. “The problems are usually things like overcrowding, really bad conditions, harassment from a landlord, illegal evictions because people don’t know their rights, not having their deposits returned,” the 30-year-old says.

Most problems tenants arrive with are resolved after discussions with the landlords that the organisation may take part in. “We only go [to] direct action when we need to. Unfortunately we need to do it a lot,” she says. Protests targeting landlords are about “standing up to people who have a lot more power than the people they are walking over”, she says.

We’ve got very few people painting us as vigilantes, because I think people realise how bad the crisis is

One of the group’s biggest breakthroughs came at the start of this year, when it supported several tenants in a dispute with the Dublin businessman and landlord Paul Howard.

He served eviction notices on tenants of an apartment on Mountjoy Square, also in Dublin’s north inner city, last November, after they refused to pay a rent hike that was above the annual 4 per cent increase allowed under rent-pressure-zone regulations. Three tenants disputed the increases with the Residential Tenancies Board, the body responsible for rental-market standards.

In December protesters gathered outside the apartment, and prevented the tenants from being removed from the building.

But in late January Howard and several other men forcibly evicted tenants from the apartment, also removing activists who were staying overnight to try to prevent the eviction.

In five separate orders since January the board has ruled in favour of the Mountjoy Square tenants, ordering Howard to pay more than €13,500 over the evictions.

One of the tenants, Rejane Radtke, is glad the board had taken action. It “proves there is a bit of justice in the Irish housing system”, she says.

So are the activists worried about being labelled vigilantes? “In the last year we’ve got very [few] people painting us as vigilantes, because I think people realise how bad the crisis is,” Connolly says, who adds that they mostly hear from people who are happy that someone is standing up to landlords.

Enda McHugh, another senior member of the group, who got involved during the demonstrations at Mountjoy Square, spent a night sitting with the tenants, who he says felt vulnerable alone. It was “an interesting experience sitting in a stranger’s sitting room, waiting for the door to be kicked in,” the 27-year-old says. “I’ve gotten deeply involved in eight or nine months, so at times it does take a huge amount of your time,” often to the detriment of work or college, he says.

Outside the Summerhill property cars beep in support every few minutes; a man on the street stops to wave to the occupants. “Make sure you get our city back,” he shouts.

Later a garda stops to ask if he can have one of the Leo Varadkar masks the protesters wear inside the house, to hide their identities; one is thrown down from an upstairs window.

The occupants have held several demonstrations outside the property, attended by large groups of supporters. “People have been stopping on the street to congratulate us, hundreds of people have signed up to get involved, almost everyone agrees something must be done, and 90 per cent of people do agree with the tactics,” McHugh says. The organisation is nonviolent and does not aim to come across as threatening, he says.

If the fire department closes down a property for health-and-safety reasons, the people occupying it are in danger. Safety must be considered a priority

The momentum the group has picked up in the past year comes from a growing consensus that “something needs to be done”, he says. “If you spend time dealing with people on the sharp end of the housing crisis, I think you will agree with where we are coming from.”

Not everyone agrees, however. Stephen Faughnan, chair of the landlord group the Irish Property Owners’ Association, says there is “no excuse” for tenants or landlords to break the law. “It is not safe for landlords, tenants or protesters to take the law into their own hands,” he says. “If the fire department closes down a property for health-and-safety reasons, the people occupying it are in danger. Safety, security, injury and insurance issues must be considered as a priority.”

There was a perception that landlords in the private rental market were the cause of the housing crisis, he says. “It is convenient to blame landlords for homelessness, but the real problem is increasing population and lack of planning by the State to house people.”

John-Mark McCafferty, chief executive of tenant-rights charity Threshold, believes the occupation is an “expression of the frustration people have with the housing crisis”. The charity helps tenants take cases to the Residential Tenancies Board and provides people with information about their rights.

Foreigners are particularly vulnerable in the Irish rental market, and open to exploitation or substandard conditions, says McCafferty. They have fewer options, “as they need to find a place very quickly when they come to the country”, often resulting in people settling for cheap but severely overcrowded housing.

Rising rents have prompted the growth of a rental black market in Dublin, primarily among foreign students and workers. The scarcity of affordable accommodation means many will settle for overcrowded housing – often with no official contract, and payments in cash only. Vacancies are advertised not on rental listing sites but in private Facebook groups.

In this portion of the housing market tenants will sleep in small rooms with between three and five other people, mostly in bunk beds. Rents range from €300 to €450 a month, and tenants are mainly from Latin America.

In late May the group received reports from English-language students who had rented apartments at Hazelwood Student Village, in Glasnevin in Dublin, that a landlord, 28-year-old Basilio Carvalho, was withholding deposits.

Several days later a dozen activists pushed into his office in Temple Bar. Streaming the action on Facebook Live, they confronted the landlord, who runs a small firm called Spencer Accommodation, to demand he return all tenants’ deposits. The activists followed Carvalho around the city centre for several hours, chanting that he owed 40 tenants their deposits.

Carvalho told The Irish Times in May that he would return deposits to 39 tenants who were owed money.

Is there a danger of publicly identifying a blameless person in such protests? It would be “disastrous” if the group named an innocent individual or landlord on social media, in a case of mistaken identity, Connolly says. “It would be really embarrassing . . . but we have checks.”

Speaking after the High Court order, a spokeswoman for the Summerhill occupation said the protest had been “very successful”.

The aim of the action had been to “broaden the conversation” around the housing crisis, she said, so that as well as the problem of homelessness it included the wider difficulties people were facing in the private rental market.

The activists occupying the Summerhill property left on Friday morning, following the High Court order. The Summerhill Occupation group’s Facebook page said the occupation of the inner city house was “the beginning not the end”.

An agent for the plaintiff arrived at the premises shortly after 9am accompanied by private security. A drill was used to open the front door.

Pat O’Donnell & Co, Paul Howard, and Basilio Carvalho did not respond to requests for comment for this article.

1 More than 30 people queue overnight to secure property in Carlow
2 Large sections of Garda to be disarmed following review
3 Hello Eir, is anybody there? Four unhappy customers complain
4 Covid-19: Possible extra restrictions for four counties to be decided by weekend
5 Coronavirus: Further 430 cases reported in State is most in a day since April
Real news has value SUBSCRIBE