RTÉ Radio 1 is launching its inaugural Folk Music Awards, and the recipient of its first Lifetime Achievement Award is a hugely loved veteran who’s earned his stripes 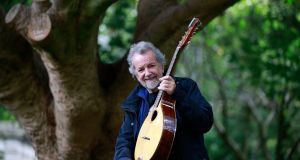 Andy Irvine: ‘I don’t think that the music’s ever been stronger. Some of the kids could play the socks off you.’ Photograph: Nick Bradshaw for The Irish Times

If folk music can be described as music “by, of and for folks” (to hijack a phrase), Ireland can lay claim to a remarkably sturdy inheritance. Our folk canon depends on the inventiveness of its artists to renew its lifeblood across the generations, and this is a role that a remarkably diverse range of singers and musicians embrace vigorously these days. Unlike many other countries, we have a thriving folk scene, but still we’ve been tardy in our willingness to give it the recognition it deserves. The UK has the BBC Radio 2 Folk Awards and the US the International Folk Music Awards. Now, RTÉ Radio 1 is inaugurating its very own Folk Awards to address that void.

The nominees (listed below) bear testimony to the robust state of renewal at the heart of our folk scene. Lankum, Ye Vagabonds, Irish-Iranian band Nava and Radie Peat are all in the running for laurels at the October awards ceremony, although there’s a disappointingly small number of women among the finalists, apart from the category of Folk Singer of the Year.

The recipient of the first Lifetime Achievement Award is someone who’s earned his stripes over a career spanning five decades and five continents. A founding member of some of the most influential bands in the world of folk and traditional music, “his contribution and influence will be long lauded when the rest of us are long gone”, according to Anne-Marie Power, head of arts and culture at RTÉ.

Andy Irvine has always been a man who’s let his music do the talking. From Sweeney’s Men to Planxty, Patrick Street, Mozaik, LAPD and, most recently, Usher’s Island, he’s stayed true to his own songs and never tires of the road. News of this Lifetime Achievement Award elicited a response that’s quintessentially Andy: modest and low-key.

“Gratitude,” he offers without hesitation by way of explanation. “Pleasure at finally being recognised. I was delighted. It’s often occurred to me that my main motivation in being on stage, apart from the fact that I love the music is that – if I were to go to a psychiatrist – I might find that being loved is an important part of my psyche.”

Irvine’s mother was a musical comedy actress and, while he gloried in her collection of what he calls “a bunch of fairly awful and cracked 78s”, his ears only pricked up in earnest when he discovered the music of Woody Guthrie at the age of 15.

Andy began writing letters to Guthrie from the age of 17.

“I just wanted to be connected with this man,” he offers blithely, referring to a time when there was no internet or ready means by which artists could be located. “I immediately connected with his music when I heard it. How to find anyone in the world at that time was not easy but I found out that he was in a hospital in New Jersey with that dreadful, incurable disease [Huntington’s Chorea] that he’d inherited from his mother. Later, they discovered all my letters to him, which were sent to the Woody Guthrie Archive. Years later, I visited there (in Tulsa, Oklahoma) and I photographed them all, and I shook with embarrassment at some of the things I’d said!”

It’s Irvine we have to thank for so many intricate and rhythmically challenging tunes which are now so much part of our repertoire. Many are from, or inspired by, Balkan tunes he picked up on a two-year sojourn in Eastern Europe before he became a founding member of Planxty in 1972. Mominsko Horo cosied up alongside The Wind that Shakes the Barley on the band’s 1974 album, Cold Blow And The Rainy Night as if they had been lifelong bedfellows.

“I didn’t really understand those rhythms until after I had come back home,” he says, “and I just bought some EPs. I listened intently: 1, 2, 3 and 1, 2, 3 and once I discovered and understood that, it was ‘Eureka, I’ve found it!’ It was a great breakthrough.”

Since then, many musicians have written tunes in those calculus-like rhythms.

“One of these days we might have to find a name for them,” Irivne smiles mischievously. “I know: we’ll call them jeels.”

Those Irvine tunes are a law unto themselves.

Irvine nods in agreement. “Most of my musical peers would say – apart from Dónal Lunny – ‘hmmm, very odd sense of rhythm, that man.’”

Irvine continues to take to the road with impressive regularity, and his journeys are generally epic in scale. His latest collaborations include a return to his seminal 1977 album with Paul Brady (which they’ll reprise along with Kevin Burke and Dónal Lunny in October in the Bord Gáis Energy Theatre) and Usher’s Island (with Paddy Glackin, John Doyle and Michael McGoldrick). Do these collaborations continue to feed his solo work, and vice versa?

“I think so,” he offers, in that characteristic mild manner that is his, “because your ability with a band is so much more than your own personal ability. But there’s a great freedom to playing on your own too: making a mistake and not throwing the rest of the band.”

And therein lies Andy Irvine’s gift: what the audience witnesses is effortlessness, yet he works exceedingly hard and with great diligence. The essence of great art: effort concealed.

Having played folk and traditional music when it was literally neither popular nor profitable, what does Irvine make of its current state?

“It’s truly remarkable,” he says. “It’s quite staggering. I don’t think that the music’s ever been stronger. Some of the kids could play the socks off you. I mean, I don’t know how they’re so well able to do that. I’d say that the future of traditional music in Ireland is well set for a couple of generations.”

Irvine is adamant that luck was on his side, being in the right band at the right time, when he joined Planxty. He was nothing short of flabbergasted by the trajectory their career paths followed, and that surprise was further amplified in 2004 when Planxty reunited.

“Oh that was magic,” he offers, grinning broadly at the memory of those electrifying concerts. “I personally think that we were better then than we had ever been before, which is odd because we were in our 60s.”

And if he had to choose just three songs from his knapsack, what would they be?

“You Rambling Boys of Pleasure, he says, mulling over the challenge quietly. “The Blacksmith and Never Tire of the Road – to keep myself honest.”

Best Traditional Folk Track
Cucanandy – The Gloaming
Bean Dubh A’ Ghleanna – Muireann Nic Amhlaoibh
What Will We Do When We Have No Money? – Lankum
Lowlands of Holland – Ye Vagabonds
The Bonny Light Horseman – Lúnasa and Natalie Merchant