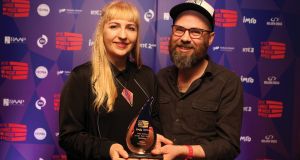 Ships with the Choice Music Prize for Irish Album of the Year. Photograph: Graham Keogh

Ships, an electronic two-piece from Dublin, are the surprise winners of the Choice Music Prize for best Irish album of the year. Their victory, for their record Precession, was announced in Vicar Street, Dublin, where 10 shortlisted artists performed.

Precession, which McGrath and partner Simon Cullen self-released in April 2017 with the assistance of a crowd-funding campaign, had received overwhelmingly positive reviews but was not widely regarded as a Choice front-runner, with “trad punk” group Lankum and singer-songwriters James Vincent McMorrow and Fionn Regan perceived as having more realistic hopes of winning.

“There are no rough swells here, but rather gentle, reflective propulsive shifts in tone and rhythm,” The Irish Times had declared in its review of the LP. “Simply put, it’s supremely accomplished, intelligent music from perceptive practitioners.

Also at Vicar Street, Tullamore pop trio Chasing Abbey were awarded a separate prize for Irish Song of the Year for their single That Good Thing. In contrast to the album award, decided by a panel of music media professionals, the song of the year is determined by public vote and winners tend to have a commercial track record. That was certainly the case with That Good Thing, which has received heavy radio rotation and more than one million plays on Spotify.

It’s the 13th year of the Choice, which was initially regarded Ireland’s answer to the UK Mercury Music Prize but has since established its own distinct identity. Previous winners have run the gamut of domestic music, from experimental singer Julie Feeney to post-modern traditional ensemble The Gloaming. Last year’s prize went to rap Limerick rap trio Rusangano Family.

Ships will hope the win can serve as springboard for their career. The Choice’s track record in minting new stars is admittedly mixed, with early winners such as the aforementioned Feeney and Newbridge electronica group Super Extra Bonus Party returning quickly to obscurity. Among the higher profile artists to be honoured at the ceremony are Divine Comedy, Two Door Cinema Club and Villagers. But an a-list aura does not necessarily sway the panel – with Hozier, The Script and U2 among the big names to have had their Choice dreams dashed.

On International Women’s Day it was appropriate that Ships should be the third female-fronted act to claim the Choice. Just two women had previously walked away with the trophy – Feeney in 2006 and Derry singer Soak in 2015.

“Making an album can get intense,” concluded  Cullen, who is also McGrath’s romantic partner, in a backstage radio interview. “But so can arguing over the dishes.”