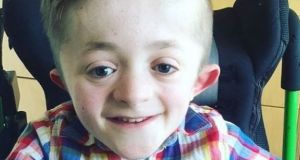 Speaking to a packed out church, family friend Eimear McGrath remembered “Michael the warrior” who had the special gift of brightening other people’s lives and a huge “generosity of spirit”.

Tributes have been paid to the “tiny but tough” Michael Stokes, the 15-year-old with “an enormous capacity to love” who died at Temple Street Children’s Hospital on Saturday.

Hundreds of mourners gathered at the Church of the Sacred Heart in Malahide on Wednesday morning to celebrate the life of the teenager who came to national prominence after his appearance on RTÉ’s Room to Improve programme in 2015.

Michael Stokes died at the weekend following a tragic accident.

The 15-year-old suffered from Osteogenesis imperfecta (OI) - a genetic disorder which causes bones to break easily.

Speaking to a packed church, family friend Eimear McGrath remembered “Michael the warrior” who had the special gift of brightening other people’s lives and a huge “generosity of spirit”.

She described how the enthusiastic and loving teenager had discovered his own identity since moving into the full time foster care of his former teacher Ann Higgins and her husband Barry a few years ago.

“At last he was bathed in the kind of constant, everyday love that allowed him huge growth in his self-confidence,” she said.

Ms McGrath also remembered the “mischievous” boy who had emerged as a “confident teenager” in the last year. “Rumour has it that he may have had a kiss or two in the last few months,” she said as laughter and smiles rippled across the large congregation.

“He was the master of not only making the most of what he had but of living it and loving it to the full. Michael’s life was not one to be mourned but one to be embraced and followed.”

Ms McGrath also paid tribute to Michael’s parents, John Paul and Siobhán, “who loved Michael enough to share their son with Ann and Barry so that he could have two mums and two dads”.

Ann and Barry expressed their gratitude to the nurses at Temple Street Children’s hospital who not only cared for Michael throughout his life but particularly in the final seven weeks of his life. They also thanked the Central Remedial Clinic (CRC) for caring for Michael.

Father Martin Noone, who celebrated the funeral mass, spoke of how Michael had touched many lives in his short life through his “unbeatable spirit”. “Michael did in a few short years what many of us will not achieve in a long life,” he said. “Through the lens of a camera he touched the whole country.”

Architect Dermot Bannon, who took part in the funeral procession, went to the Higgins’ home in Malahide in 2016 as part of the Room to Improve programme to make it wheelchair accessible and suitable for Michael’s needs.

In an Instagram post, Mr Bannon said it had been a privilege to know “this amazing young man”.

Michael appeared on the Late Late Show earlier this year and spoke about being fostered and his delight at his new home. On the programme Michael said: “I know Ann because she was my teacher and I met Barry at my communion party. I have my own bed, I have my own desk. I love everything, everything is at my level.”