Tenants whose landlord tried to evict them welcome injunction 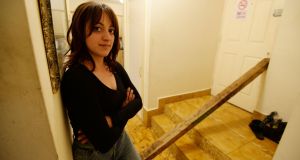 Verena Lauer, one of three tenants who lodged disputes at the RTB challenging a rent increase for the apartment they shared in Mountjoy Square, Dublin. Photograph: Alan Betson

A group of young tenants whose landlord attempted to evict them have welcomed a court injunction restraining him from entering their apartment until the New Year.

The six tenants, all in their 20s and from France, Germany, the United States and Brazil, have been sharing an apartment in Mountjoy Square, Dublin.

Their landlord, businessman Paul Howard, is alleged to have sought a rent increase more than twice the permissible 4 per cent in a designated rent pressure zone and, last Friday, to have changed the locks and cut off electricity to the apartment.

On Wednesday, Dublin Circuit Court heard an application from the Residential Tenancies Board (RTB) for extension of an interim injunction granted at a late sitting of the High Court on Friday, December 15th.

Power was restored to the apartment on Saturday, December 16th.

Three of the tenants – Verena Lauer, Rejane Radthe and Madigan Johnson – had lodged disputes at the RTB on November 12th, 13th and 15th, challenging the rent increase. RTB adjudication hearings are due to be heard on January 9th and 11th.

Barrister Paul Finnegan, for the RTB, was granted an extension of the order, pursuant to sections 189 and 190 of the 2004 Residential Tenancies Act. Mr Justice Terence O’Sullivan directed that Mr Howard permit Ms Lauer, Ms Radthe and Ms Johnson “to enjoy peaceful and exclusive occupation of the dwelling at apartment 27, 52 Mountjoy Square, Dublin 1, pending the termination of the dispute resolution proceedings . . . to the 11th January 2018”.

Ms Lauer (27), from Germany, a masters student at the University of Tübingen, arrived in Dublin in September to complete a semester at UCD.

“For the first two weeks I was with friends in Tallaght. I was lucky I got this room. One of my classmates was moving out,” she said.

Soon after she moved in, however, she says she was told her rent for her small room would increase from €650 a month to €700 (a 7.7 per cent increase). Her flatmates faced similar increases.

“When we told him he was not allowed to increase by more than 4 per cent he gave us three days to move out.” A framed notice on the back of the apartment’s entrance door says: “The landlord has the right to give three day [SIC]notice if any of the following conditions are breached. 1) Strictly non-smoking. 2) No person shall enter the the property that is unknown to the tenant. 3) The tenant will only contact with landlord Paul Howard in relation to his property.”

Ms Lauer says when they did not pay the higher rent a further eviction notice was served on November 7th, with notice to quit by December 5th. “We filed disputes with the RTB. They assured us everything he was doing was illegal.” She says he told them he would not recognise the RTB.

When the power was cut the tenants contacted the RTB, which went straight into the High Court for an interim injunction.

Three of the tenants have since moved out. Ms Lauer said “of course I am happy” that an order had been served against Mr Howard.

Mr Howard was not represented in court on Wednesday. He did not respond to email or phone contacts from The Irish Times.