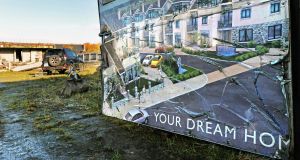 Ireland will experience a level of housing exclusion and rising inequality, in the coming decade, on a scale unrecognisable from our current emergency, with devastating implications for our society, economy and environment. Photograph: Eric Luke

House price rises, queues, and unaffordable rents. It’s another bubble in Irish housing. But this is different from 2008. The Irish housing system has undergone a structural “shock” in the last decade. From homelessness and mortgage arrears to the emergence of a “generation rent” that is locked out of home ownership.

Unfortunately, Government policies are worsening the crisis. Rather than providing an additional supply of affordable housing the social housing strategy is inadequate. It is too heavily reliant on the private rental and construction sector.

Meanwhile the ongoing facilitation of speculative property and financial investment in housing is adding significantly to demand. Investors bought almost a fifth of all homes in 2017, inflating property prices and rents.

Furthermore, the Government has persisted with the failed private market supply approach to solving the problem. Apartment sizes have been reduced and private infrastructure funded while house prices and rents have been encouraged to rise – aided by “demand-side” policies like “help to buy” – in order to increase the profitability of construction.

However, such policies are not increasing supply. Private developers hold monopoly positions and are hoarding land while waiting for prices to rise before building. And when they do build, “market forces” dictate that the new supply will be expensive homes for sale or expensive rentals for investor landlords.

The Irish and international experience shows that only “non-market” – State and not-for-profit -providers guarantee a sufficient supply of affordable housing.

Ireland will experience a level of housing exclusion and rising inequality, in the coming decade, on a scale unrecognisable from our current emergency

Ireland’s housing system is also worsening inequality. The “rentier class” are increasing their wealth exponentially from those living in the rental sector – mainly the poor, young and low-and-middle-income workers – and from the State through social housing schemes.

Property investors exert an undue influence over Government policy. The failure to implement long term, eg 20-year, tenant leases, protections against eviction and setting rent caps at 4 per cent rather than inflation, show how investors’ interests have been prioritised over citizens’ housing needs. The latest rental proposals do little to address these fundamental problems for tenants.

Based on the trajectory of current policy, Ireland will experience a level of housing exclusion and rising inequality, in the coming decade, on a scale unrecognisable from our current emergency, with devastating implications for our society, economy and environment.

The crisis will deepen as housing unaffordability and homelessness rise. Thousands of tenants from buy-to-let mortgage properties in arrears are likely to be evicted. Homeowners in arrears will be repossessed. All this will combine with an inadequate supply of social and affordable housing. The worst is yet to come in this latest iteration of the Irish housing crisis.

This is a defining moment. The policies implemented in the coming years will determine our housing system and housing needs of our population for decades to come

The issue is not a lack of alternative policy solutions, but rather why they are not being taken up, funded and implemented with unrelenting determination. Alternatives include: increased funding for local authorities to build; setting up a new semi-State to build 20,000 affordable “cost-rental” and “co-operative” homes per annum for a mix of incomes; enhancing tenant protections and putting the right to housing into the Constitution. The problem is that inertia, lethargy and a private market perspective dominate the State’s approach.

This is a defining moment. The policies implemented in the coming years will determine our housing system and housing needs of our population for decades to come. Is it to be a consolidation of this dystopia where housing is treated as a financialised commodity and wealth accumulating asset for investors or will our people have their need and right to a home fulfilled?

It has been shameful to see government blaming the victims of the crisis to try and normalise what is ethically unacceptable. Why are they so lacking in ambition that societal concern and solidarity is not drawn on to justify taking bold action – such as forgoing tax cuts to invest in housing or pushing for flexibility from the EU for investment?

The extent of regulatory capture of government by the property investors and financiers (who obviously do not want to see an increase in the supply of State-built social and affordable housing) means that, echoing the words of Nobel prize-winning economist Amartya Sen, a “public outcry”, of Irish civil society is required to bring about real change.

Apollo House inspired widespread public support, and it was heartening to see 10,000 attend last weekend’s Housing and Homeless Coalition protest. But the movement needs to go grow and extend across Irish society to include renters, students, precarious workers and professionals, aspirant homeowners, and those needing social housing, to protest and make housing a central electoral issue in order to pressure the State and Government to change direction before it’s too late.