New this weekend: Toni Morrison: The Pieces I Am, Sulphur and White 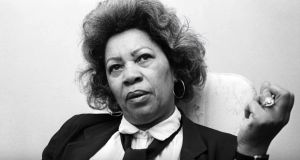 Toni Morrison: The Pieces I Am

TONI MORRISON: THE PIECES I AM ★★★★☆
Directed by Timothy Greenfield-Sanders. Featuring Toni Morrison, Oprah Winfrey, Russell Banks, Angela Davis, Barack Obama. QFT, Belfast; IFI, Dublin, 120 min
The late Toni Morrison had just celebrated her 88th birthday when this appealing documentary portrait directed by her friend, Timothy Greenfield-Sanders, premiered at Sundance last year. A warm, smiling presence on camera, the Nobel Prize-winning author quickly and unsurprisingly utilises her gift for storytelling. The film is not as structurally daring as its subject, but it makes great use of archive and text alongside its talking heads. Many of the contributors –including Winfrey, who promoted Morrison’s novels through her Book Club and starred in the film version of Beloved – have gathered to worship. Fair enough in the circumstances. TB

Searing story of David Tait, a city trader who channelled anger at childhood abuse into a ruthless career strategy. There is, with such stories, always a tension between coyness and the queasy prurience that drove the craze for “misery memoirs” at the turn of the millennium. For the most part, director Jarrold – best known for the very different Kinky Boots – finds a satisfactory balance between those two extremes. Stanley is strong in the lead. DC

Moss flees her abusive – and now conveniently transparent – husband in a cracking film that owes as much to Gaslight as it does to any version of HG Wells’s alleged source. The antithesis of vast, pompous blowouts like the same distributor’s remake of The Mummy, The Invisible Man is economic, disciplined and rich with intent (though not exactly short). Moss confirms she has the most expressive face in US cinema. There are at least two fist-in-the-mouth shocks. Essential. Full review DC

Dark Waters dramatises an environmental scandal in West Virginia that ontinues to have repercussions. A dogged corporate lawyer (Ruffalo) is a new partner at a swanky firm that specialises in the environmental defense of large chemical companies. He switches sides, with the support of his tolerant boss (Robbins), after being contacted by two farmers who believe the local DuPont plant is dumping toxic waste that is killing their cattle. If you didn’t see “Directed by Todd Haynes” in the credits, you’d never guess that the filmmaker behind such hyper-styled melodramas as Far from Heaven was involved in this solid, old-fashioned whistleblower drama. Haynes has cited the influence of paranoia classics All the President’s Men and The Parallax View, and there are moments in Dark Waters that impressively parrot these predecessors. Full review TB

Rough, wild adaptation of Peter Carey’s great novel concerning the emergence of Ned Kelly as a bushranger icon. Kurzel hits form again with a careering drama that harks back to bleary cinematic experiments of the early 1970s. In a role played previously by Mick Jagger and Heath Ledger, McKay is terrific – both hard and vulnerable – as the child of a misused mother and a ruthless Irish father. Like Jennifer Kent’s recent The Nightingale, True History of the Kelly Gang gives us an Australia still inventing itself from European spare parts. Fascinating, if not always coherent. Full review DC

“He chooses the memory of her. That’s why he turns. He doesn’t make the lover’s choice, but the poet’s.” Marianne says this of the Greek myth Orpheus and Eurydice as Héloïse reads it to her. It’s an interpretation that doubles as an organising principle for Sciamma’s ravishing historical romance composed of indelible images, not least the painting of the title. In the late 1800s, Marianne (Merlant) , a young painter, arrives on a island off the coast of Brittany. She has been commissioned by a countess (Golino) to create a wedding portrait of her daughter Héloïse (Haenel) for a Milanese nobleman. But Héloïse does not wish to be married off and refuses to pose for the portrait. So Marianne is instructed to paint her in secret. As the young women spend time together, they fall in love. Elegantly structured and impossibly beautiful. Full review TB