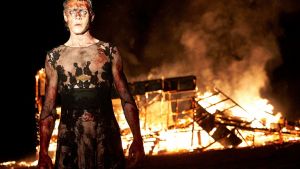 The latest take on a legend who has been inspiring films since the start of the medium (The Story of the Kelly Gang, from 1906, has claims to be the first ever dramatic feature) takes in a pondering of how such a man became the definitive Australian protagonist.

A teacher, speaking to a distinguished crowd, notes wearily that a horse thief is somehow honoured above all others (this was sometime before the arrival of Don Bradman).

Neither Peter Carey’s brilliant source novel nor Justin Kurzel’s angular, awkward adaptation offers definitive answers, but both enjoy their plough through colonial abuse and the rough origins of a developing nation.

After the excellent Snowtown, the unintelligible Macbeth and the ghastly Assassin’s Creed, Kurzel hits form again with a careering drama that harks back to bleary cinematic experiments of the early 1970s. George McKay is terrific — both hard and vulnerable — as the child of a misused mother and a ruthless Irish father.

Like Jennifer Kent’s recent The Nightingale, The Kelly Gang gives us an Australia that, its indigenous peoples aside, is still largely inhabited by immigrants with European accents. Much of the violence is Irish insurgency through other means.

The local sergeant (Charlie Hunnam), who has his way regularly with Ned’s mum, speaks with a pronounced Geordie twang. As Jed Kurzel’s excellent score rackets away, Kelly is essentially sold to older bushranger Harry Power (Russell Crowe) and becomes inducted in the ways of professional violence.

True History of the Kelly Gang offers no neat creation stories. The iconography bubbles throughout — an opening shot, through a rectangular gap, reminds us of the armour Kelly will eventually wear — but we never arrive at a gang robbing merrily like the heroes of Butch Cassidy and the Sundance Kid.

Kurzel is more interested in assembling impressions of the unsettling weirdness of that spun out from the era’s cultural maelstrom. The film doesn’t exactly embrace its queerness, but a revel in the gang’s taste for dressing as women takes us somewhere new for the antipodean western.

Crowe does only a few things brilliantly, but happily the looming, belching charismatic brute is one of those things. All contribute to a film that does better at creating a universe than telling a disciplined story.

The eventual end of that universe points runs up one possible explanation for the adoration of Kelly. We arrive in a more polite, more civilised, but (if the film is to be credited) a more boring Australia. Kurzel’s punk Kelly speaks to the last throes of a formative era.