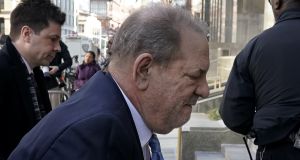 The conviction of Harvey Weinstein on two charges of sexual assault continues and accelerates an unlikely fightback against the violent oppression of women in Hollywood. It seems scarcely believable that only 2½ years have passed since, following investigations by the New York Times and the New Yorker magazine, the producer was revealed (or, perhaps, confirmed) as a sexual predator of appalling proportions.

The jury in New York determined that Weinstein performed a “forcible sex act” on production assistant Mimi Haleyi in July 2006 and raped actor Jessica Mann at a hotel in 2013. He was thus found guilty of criminal sexual assault and of rape in the third degree. The jury declared him not guilty of predatory sexual assault and of rape in the first degree. Those last, more serious charges related in part to the actor Annabella Sciorra. He will be sentenced at a future date and could face as many as 25 years in prison.

Though the prosecution will be disappointed not to win on all counts, the #MeToo train remains on the tracks

In some senses, it would have been a larger story if Weinstein has been found not guilty. Since the story broke in 2017, the momentum has been towards every greater exposure of abusers and ever less tolerance of excusers. Kevin Spacey has largely vanished from public view following accusations of sexual misconduct. Television celebrities such as Charlie Rose and Mark Halperin have also been affected. The director Bryan Singer was edged away from Bohemian Rhapsody when rumours emerged of potential abuse (though his name still appeared in the credits of the Oscar-winning film).

Movie sets now employ intimacy co-ordinators to ensure that actors are not mistreated in sex scenes. Were Weinstein absolved it would have been hard to avoid the impression that the momentum had been at (at the very least) retarded.

Judge James Burke warned the jury in New York that they should not view the case as a referendum on the #MeToo movement. By considering the facts disinterestedly and finding for the prosecution, those 12 people have, nonetheless, given strength to victims yet to bring their stories to the police.

By some measures, fewer than 12 per cent of rapes prosecuted in the US lead to conviction. The odds must feel that bit more daunting when the accused carries the power and influence of a Harvey Weinstein into the courthouse.

Despite the wealth of evidence that accumulated in the wake of the 2017 reports, many pessimists believed he would never come to trial and that, if he did, his lawyers would repel conviction. Court reporters noted that, in recent days, Weinstein, who has made much of his physical frailty, had looked increasingly optimistic. Though the prosecution will be disappointed not to win on all counts, the #MeToo train remains on the tracks.

Speaking to this writer recently, John Boorman, veteran director of Excalibur and Point Blank, spoke regretfully about the conspiracy of silence around Weinstein. “I must say I have to probably take a measure of blame for Harvey Weinstein,” he said. “We knew that’s what was going on and we probably should have spoken out more. I always found him a ghastly character.”

Weinstein’s power in Hollywood was one impediment against speaking out. That ceased to be an issue by Christmas of 2017. Another, wider challenge was the intricacies of the legal system and the pressures it puts on victims of sexual violence. The verdict certainly doesn’t solve those problems, but it shows that victory is possible.

Thoughts will turn to those waiting for their day in court. It is also worth remembering the older film professionals – hundreds of unrecorded stories – who, over the past century, have suffered at the hands of an industry that wasn’t prepared to entertain whispers about the most appalling of sexual crimes.

Many died without learning that a reversal was coming.

TV Guide: 24 of the best TV shows to watch this week
9