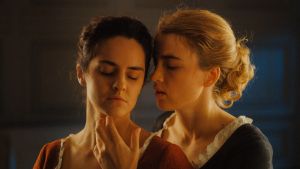 Noémie Merlant and Adèle Haenel in Portrait of a Lady on Fire. Photograph: Lilies Films

Film Title: Portrait of a Lady on Fire

“He chooses the memory of her. That’s why he turns. He doesn’t make the lover’s choice, but the poet’s,” Marianne (Noémie Merlant) says of the Greek myth Orpheus And Eurydice, as Héloïse (Adèle Haenel) reads it to her.

It’s an interpretation that doubles as an organising principle for Céline Sciamma’s ravishing historical romance, a film composed of indelible images, not least the painting of the title. (Well, almost, there’s been some fidgeting with the translation from the original French: Portrait de la jeune fille en feu).

In the late 1800s, Marianne (Noémie Merlant), a young painter, arrives on a remote island off the coast of Brittany. She has been commissioned by a countess (Valeria Golino) to create a wedding portrait of her daughter, Héloïse (Adèle Haenel), for a Milanese nobleman. Héloïse, who does not wish to be married off, has refused to pose for the portrait so Marianne is instructed to paint her in secret. As the young women spend time together, they fall in love.

Portrait of a Lady on Fire, which won both Best Screenplay and the Queer Palm at Cannes last year, is elegantly structured and impossibly beautiful. The minimalism that defined Sciamma’s Water Lillies and Tomboy gives way to a more ambitious sense of her-story, with a narrative that touches on 18th century abortion, drug-taking and all-girl parties. When mother goes away there’s even something like a house party by candlelight with Sophie (Luàna Bajrami).

Working with cinematographer Claire Mathon (Stranger by the Lake, Atlantics) and the film’s central conceit, the writer-director incorporates profound and playful notes on the female gaze. By the time the final heartbreaking, all-a-flutter sequence plays out to the strains of Vivaldi, it’s been a remarkable sensory journey.

Echoing the romance at the heart of the film, between Dorothée Guiraud’s gorgeous costume designs, the windswept coastlines and lighting design that recalls Barry Lyndon’s Nasa-assisted glory, there’s almost too much to love.