No Time To Die: It’s the latest of several blows for the crisis-hit movie starring Daniel Craig 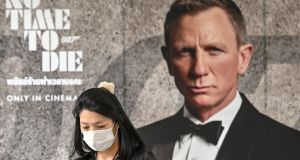 A woman wearing a facemask amid fears of the spread of Covid-19 walks past a poster for the James Bond movie No Time to Die. Its release has been delayed to November. Photograph: Mladen Antonov/AFP

As concerns grow about the effect of the coronavirus on cultural and sporting events, it has been announced that No Time to Die, the 25th James Bond film, has been pushed back from April to November. This is the latest in a string of problems for the new Bond film. Danny Boyle, originally hired as director, left the project due to creative differences in 2018. Daniel Craig, returning as 007, suffered an ankle injury on set and had to undergo surgery.

It is highly unusual for such a significant film – arguably the biggest of the year – to be postponed just a few weeks before its planned release. The terse press statement made no specific mention of the virus, but speculation inevitably turned in that direction. The release reads: “MGM, Universal and Bond producers, Michael G Wilson and Barbara Broccoli, announced today that after careful consideration and thorough evaluation of the global theatrical marketplace, the release of No Time to Die will be postponed until November 2020. The film will be released in the UK and Ireland on November 12, 2020 with worldwide release dates to follow, including the US launch on November 25, 2020.”

Universal Pictures, distributors of the film in this territory, will have to rearrange a hugely complicated calendar of premieres, press junkets and promotional activities. Rescheduling the world premiere, originally planned for the Royal Albert Hall on March 31st, will, in itself, be an operation akin to standing down the Arnhem Landings. The film was due to open on April 3rd and, now it has moved to the autumn, the first week of that month is now free of major commercial releases.

The news comes after two James Bond websites published an open letter calling for the postponement of No Time to Die. Industry analysts fear that the disease could hit box office returns by as much as $5 billion (€4.5 billion). Walt Disney has already cancelled a glamorous event, due late this week, celebrating the European launch of the Disney+ streaming service.

“Due to a number of media attendee cancellations and increasing concerns at the prospect of travelling internationally at this time, we have decided to cancel our Disney+ launch events scheduled to take place on Thursday and Friday,” noted a statement.

Concerns are now growing about the fate of the Cannes film festival in May. Last week, following the diagnosis of a coronavirus case in the French city, the authorities were driven to ambiguously inform Variety that “as of today, it is still premature to express assumptions” on any rearrangements.