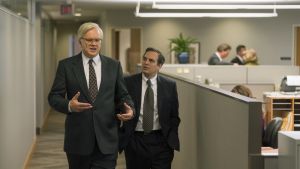 Dark Waters dramatises an environmental scandal that happened (and continues to have repercussions) in Parkersburg, West Virginia.  Dogged corporate lawyer Rob Bilott (Mark Ruffalo) is a new partner at a swanky Cincinnati law firm that specialises in the environmental defence of large chemical companies. He switches sides, with the support of his surprisingly tolerant boss (Tim Robbins), after he is contacted by two West Virginia farmers who believe the local DuPont plant is dumping toxic waste that is killing their cattle.

If you didn’t see the words “directed by Todd Haynes” in the credits, you’d never guess that the film-maker behind such hyper-styled melodramas as Far From Heaven was involved in this solid, old-fashioned whistleblower drama.

Haynes has cited director Alan Pakula and cinematographer Gordon Willis’s paranoia films – All The Presidents’ Men and The Parallax View – as influences, and there are moments in Dark Waters that impressively echo these predecessors. The spectacle of Ruffalo dwarfed by stacks and boxes of evidence is emblematic of the film’s daunting task. The script by Mario Correa and Matthew Michael Carnahan draws on two longform articles and a series of pieces from The Intercept.

There’s a lot to get through. In the 1950s, DuPont chemicals purchased the formula perfluorooctanoic acid (PFOA), or C8, a component used in the manufacture of industrial coatings like Teflon and Scotchgard. As with Adam Driver in the similarly-themed The Report, Bilott’s investigation into DuPont’s pollution and their continued use of toxic chemicals for decades after discovering that they caused fatal diseases, becomes an obsession. It drives a wedge between himself, his wife, and his colleagues.

Ruffalo, whose personal interest in the case helped bring it to the big screen, internalises brilliantly and he has terrific assistance from such reliable character actors as Bob Camp. Unhappily, Anne Hathaway attempts to compensate for her thankless wifey role by emoting furiously and distractingly.

This is the kind of issue-driven cinema that used to win Oscars. That Dark Waters and Just Mercy weren’t mentioned during awards season is as troubling as it is perplexing.