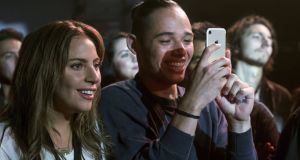 Lady Gaga, Anthony Ramos and an iPhone in A Star Is Born: Apple reportedly requires on-screen use of its products to reflect favourably on the company

Rian Johnson, the director of Star Wars: The Last Jedi, has lifted the lid on a secret in the world of product placement: Apple will not allow its kit to be used by a villainous character on screen.

“Apple, they let you use iPhones in movies but, and this is very pivotal, if you’re ever watching a mystery movie, bad guys cannot have iPhones on camera,” Johnson revealed in a video recorded for Vanity Fair.

Johnson let the secret slip as he took viewers through an anatomy of a scene in his latest film, the whodunnit Knives Out, which has an ensemble cast including Daniel Craig, Toni Collette and Jamie Lee Curtis.

It is common for some brands not to want to be associated with a bad guy, or for an alcohol or car brand not to want be linked with characters being drunk or involving crashes

In the pivotal scene, the will reading following the murder of a rich novelist played by Christopher Plummer, Lee Curtis’s character, Linda Drysdale, is seen holding an iPhone – prompting Johnson to give away the industry secret.

“Every single film-maker who has a bad guy in their movie that’s supposed to be a secret wants to murder me right now,” Johnson added.

Apple has long cultivated an immaculate brand image and it strictly controls how its products are used on the big and small screen. An article from Wired as long ago as 2002 pointed out that all the good guys in the long-running thriller 24 use Macs, while all the villains were seen using Windows PCs.

Guidelines advise that Apple phones, computers and other kit bearing the trademark should be seen “in the best light, in a manner or context that reflects favourably on the Apple products and on Apple Inc”, according to the site MacRumors.

Despite such stringent stipulations, Apple manages to maintain its position as a market leader with lavish exposure on both the big and small screen.

The brand tracker Concave named it the top ranking brand in films in 2018, and one which “appears in one form or another in most TV shows that take place in the modern world”.

Concave clocked up over 13 minutes of airtime for Apple in the second season of Big Little Lies, HBO’s high-end drama starring Nicole Kidman, Reese Witherspoon and Meryl Streep. Branded phones, laptops, tablets, computers and a smartwatch were all seen in the series.

But Apple is far from alone in attempting to dictate the types of content and characters brands are willing to be associated with.

“All brands have stipulations for how they want to be used and seen on screen,” says Darryl Collis, director of product placement specialists Seesaw Media. “It is common for some brands not to want to be associated with a bad guy, or for an alcohol or car brand not to want be linked with characters being drunk or involving crashes.”

Slumdog Millionaire used Coca-Cola bottles on one day of shooting. Coke objected, ‘and we had to paint out the Coca-Cola label later’, according to Danny Boyle

Danny Boyle’s 2008 hit Slumdog Millionaire swept all before it winning eight Academy Awards, but Coca-Cola and Mercedes wanted nothing to do with the rags to riches story of a boy from the slums. The movie’s producers didn’t ask for permission to use the brands in the film, and when they did later the companies recoiled at how they were depicted.

In one scene a criminal gang entices the lead actor, Dev Patel, and his brother with ice-cold Cokes in the hot Indian weather. “We used Coca-Cola bottles on the day of shooting, and we had to paint out the Coca-Cola label [later],” said Boyle in an interview at the time.

In the case of Mercedes, Boyle said the car company was not averse to being in the hit film, just to being associated with poverty.

“There is a Mercedes in the other part of the film, in a really nice, posh housing section,” he said. “They’re quite happy about [the Mercedes] being seen there, but they didn’t want it seen driving round the slum,” he said.

Daniel Craig reportedly spurned a $50 million (€45.7 million) deal that would have seen James Bond using a Samsung phone in 2015 outing Spectre – because he deemed it was not good enough for 007. An $18 million (€16.4 million) offer by Sony was also turned down by Craig and director Sam Mendes. – Guardian