After his turn in 1917, the actor is tackling the role of iconic Australian outlaw Ned Kelly 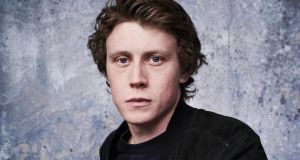 George MacKay: ‘I think the real joy of the job is going to do the research, to explore yourself and explore things outside of yourself that you probably wouldn’t even know to look for.’

George MacKay bounds into the room with the winning demeanour of a puppy that has just won Crufts. It’s not the energy you might expect from someone who has spent months and months talking to journalists.

Having just played a young British soldier who is ordered to deliver a message to call off an attack during Operation Alberich in Sam Mendes’s 1917, the actor is reaching the tail-end of what has proved an awfully busy awards season. The film, which was shot using long takes spliced together so that it appears as one continuous shot, has changed a few things for its 27-year-old star.   “It was my first experience of doing that amount of press where I’m talking about the film-making process,” says McKay. “You have to really think about how the film is put together and then you start to get a feeling of how the awards season is put together.”

Did he enjoy all those red carpets?

“It was a lot of things. It was lovely to be a part of all of that. The last few months has been quite humanising. Because you’re in a room with people that you probably knew as characters before you knew them as actors. And now they are people. Without sounding too crass, we were at this one dinner and on the day I had a funny tummy. And I’m there in my nice tux thinking, ‘oh, there’s Eddie Murphy and Jamie Foxx and Geena Davis and Scarlett Johansson and Tom Hanks. ’ And I’m thinking, ‘if I’m here and I’ve got a dicky tummy maybe it’s possible that they might have a dicky tummy.’”

1917 is MacKay’s latest stint on the frontlines. To date, he has served in Private Peaceful, Where Hands Touch, Birdsong and Defiance, in which he played Aron, the youngest of the four Bielski partisans. He was 15 when he was cast in the role.

“Defiance was the first job that someone asked me to do research for,” recalls MacKay. “The director, Ed Zwick, asked to read this book about the brothers. No one ever said that to me before because I was a kid. To be given homework, that was a big thing. But the description of that character being captured by the local police and how they made him dig a hole in the ground and lie in it. So when he was 14 years old, he had to dig his own grave? That wasn’t in the movie but I remember thinking about that making the film. This is 10 per cent of me keeping my mouth shut, but I know what happens when I go to 98 per cent.”

He’s been doing homework ever since. He spent seven months meticulously choreographing and filming traversing No Man’s Land in 1917. He did rock-climbing and yoga, and read Trotsky for Dummies, Marxism for Dummies and, most impressively, part of Marx’s daunting Das Kapital for his role as Viggo Mortensen’s son in the survivalist family of the underrated Captain Fantastic.

“I think the real joy of the job is going to do the research, to explore yourself and explore things outside of yourself that you probably wouldn’t even know to look for,” says MacKay. “I always throw myself in. So I have an excuse to try all these things that you would love to try. I’d love to know more about Karl Marx but I’m not good enough at motivating myself in the downtime. But I still do yoga.”

There were a lot of Aussie films I had to watch. There were histories of Ned Kelly to read. And a lot of music

That kind of dedication has served him well for his role as Ned in The True History of the Kelly Gang. The long-awaited adaptation of Peter Carey’s award-winning novel has director Justin Kurzel (Snowtown, Macbeth) attached and has all the menace that implies. MacKay was once again presented with lots of homework, much of it unconventional, in service of the film’s defiantly punkish approach.

“Punk energy was a big thing,” says MacKay. “Justin gave me a massive to-do list when we started filming. There were a lot of Aussie films I had to watch. There were histories of Ned Kelly to read. And a lot of music and most of that was punk music: The Drones, The Saints, Nick Cave & the Bad Seeds, The Birthday Party and that was the attitude. He always said we’re going to let go of the history on this one. We’re going to make it in the spirit of these boys. These boys were between 18 and 25 years old and they’re angry, ambitious, confused young men. So he got us to be a punk band. We had four weeks of rehearsals when we all came together before shooting and he said: ‘I’ve booked you a gig in Melbourne in a bar in three weeks; you’re going to need to write a set before that gig.’ And we did. Two of the songs are in the film.”

The young actor also travelled to Fethard in Co Tipperary in search of information on John “Red” Kelly, Ned Kelly’s father. It proved quite an education.   “I met this amazing fellow from the historical society and he asked me: ‘What do you know about the history of Ireland? Do you know there’s a North and a Republic?’ And I said: ‘Yeah, of course, it’s like Protestants and Catholics . . . uh, actually I don’t know the specifics. I’m sorry to say.’ And he went back to the 1100s. And I suddenly realise this is why the dynamics were the way they were in Australia. That’s why they had that kind of aggression towards the English police. I was thinking about what defines these first-born Australians. And I was thinking about what comes from appropriating history. So I started looking at Aboriginal culture. I went to a cultural night in Queensland with my cousin and there was a Wallaby dance, like the way you see kangaroos scratching themselves like that all the time, so that goes into the moment when Ned Kelly is boxing. Conor McGregor was a big influence too. Conor McGregor and wallabies.”

Ned Kelly has become a fixture on the cinematic landscape, with film versions dating back to The Story of the Kelly Gang (1906), which is recognised – at 60 minutes – as the medium’s first feature film. Tony Richardson directed Mick Jagger in the role in the very counter-cultural 1970 film. Most recently, Heath Ledger essayed the role in 2003’s Ned Kelly, with a script by John Michael McDonagh. That film takes George MacKay right back to where he started.

“I saw Heath Ledger play Kelly when I was in Australia, when I did Peter Pan when I was 11, and I really enjoyed it,” says MacKay. “But I didn’t revisit it or the Mick Jagger one, just so I wouldn’t cloud my mind. I’d rather be actively going towards the bits of those that I liked or actively working to not go there.”

Born in London to an Australian dad and London Irish mother (his grandmother is from Cork), MacKay has been acting professionally since the age of 11, when a talent scout visited his school and cast him in 2003’s Peter Pan. It hasn’t all been plain sailing since; he unsuccessfully auditioned for Rada, but he has subsequently scored a Bafta Rising Star Award, a Trophée Chopard at the 2017 Cannes Film Festival, and developed a canny knack for ending up in films that find cult followings: he was Saoirse Ronan’s cousin and boyfriend in How I Live Now, a dancing former squaddie in Dexter Fletcher’s jukebox musical Sunshine on Leith, based around the music of The Proclaimers, and a conflicted young gay man who becomes involved with the Lesbians and Gays Support the Miners campaign in Pride.

He grew up in a theatrical environment. His mother, Kim Baker, is a costume designer and his dad, Paul MacKay, works in lighting/stage management. Inevitably, George has forged a career between film and the boards, appearing in Eugene O’Neill’s play, Ah, Wilderness! at the Young Vic and in Harold Pinter’s play The Caretaker at the Old Vic opposite Timothy Spall and Daniel Mays.

“The beauty of theatre is the excitement of it; it lives in that moment; it has the same energy of a gig. But with film and photography, you capture the moment. It’s curated forever. And I think that’s a wonderful thing.”