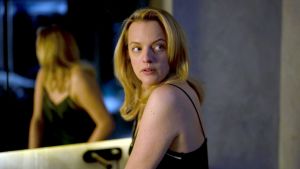 Elisabeth Moss: The most expressive face in contemporary American cinema

It is interesting to ponder how the first third of this indecently exciting film would have played if the title had been something other than The Invisible Man. The picture opens as it means to continue – tenser than Christmas at the in-laws – with Cecilia Kass (Elisabeth Moss) escaping the clutches of her abusive, billionaire boyfriend (Oliver Jackson-Cohen).

Leigh Whannell, who did such good work on last year’s Upgrade, has studied the Hitchcock playbook and taken all the right lessons. Little things get in the way. Her loyalties are tested at a crucial moment in the operation. But she eventually escapes to find shelter with an old pal (Aldis Hodge) and his plucky daughter (Storm Reid).

We then experiment with a different sort of unease. Whannell, an apparent devotee of widescreen yucks, leaning towards the Michael Haneke of Hidden, has his camera pan away from his lead actor towards apparently empty space at the other end of the room.

If the picture were called, oh, I don’t know, Gaslight or something we would be deliciously puzzled as to what we’re not looking at. Speaking to this writer, Moss did indeed suggest: “It’s almost more of a remake of Gaslight than it is of The Invisible Man.”

The allusion is to the Patrick Hamilton play – inspiration for an Ingrid Bergman movie – in which a cruel maniac persuades his wife that she’s going insane. When Cecilia walks away from the cooker, the gas ring appears to turn itself up to a dangerous level. She later sees footprints on a throw that won’t yield to her tugs. If the film weren’t called The Invisible Man we’d wonder how her ex, now allegedly dead, is achieving these undermining effects.

But it is called The Invisible Man and, looked at from one angle, it continues Universal’s effort to remake all their classic horror films from the pre-war era. You remember how the Dark Universe franchise managed to achieve terminal decline before it has even started: the bad The Wolfman led on to the very bad Dracula Untold, which was succeed by the atrocious The Mummy (officially the first in the series).

If they had just handed the commission to their partners at Blumhouse Productions, producers of Get Out and The Gift, they could have saved themselves many bad reviews and much financial embarrassment.

The Invisible Man, the antithesis of vast, pompous blowouts like The Mummy, is economic, disciplined and rich with intent (though not exactly short). It’s also about something. Whereas James Whale’s 1933 adaptation of HG Wells’s classic inclined towards comedy, the Blumhouse production ups the disquiet as it rides #MeToo aftershocks.

Working from his own tight script, Whannell demonstrates an admirable ability to place the wet-yourself shocks where you least expect them. Benjamin Wallfisch’s insidious score complements later action, but the director is prepared to play out the opening conflicts with no music whatsoever. Great thought has gone into the architecture of this ingenious structure.

None of that would much resonate without an emotional core. Happily, Moss is here to confirm that she has the most expressive face in contemporary American cinema. The Invisible Man has no pretensions about its own importance, but – like the similarly abused Olivia Colman in Tyrannosaur – Moss is eerily convincing in the conveyance of raw fear and despair at being disbelieved. Only a monster would fail to cheer her on in the closing conflagrations.

There is little here for anyone in search of a faithful take on Wells’s novel. The antagonist is still called Adrian Griffin. A nice referential flourish has Cecilia, on a visit to hospital, spotting an unimportant character bandaged up like Claude Rains in the Whale film. But that’s about it.

Why would you want another slavish translation when you have this level of frantic entertainment? An absolute cracker.