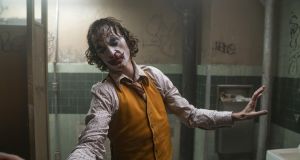 JOKER ★★★★☆
Directed by Todd Phillips. Starring Joaquin Phoenix, Robert De Niro, Frances Conroy, Zazie Beetz, Brett Cullen, Brian Tyree Henry, Marc Maron, Dante Pereira-Olson, Douglas Hodge, Sharon Washington. 16 cert, gen release, 122 min
Brutal, focused tale of a man going homicidally insane that also happens to be an origin story for Batman’s most notorious villain. Phoenix, whose title character kicks everything else into distant wings, spares no effort in keeping us diverted throughout. Wipe off the make-up and you will, however, find nothing but more make-up beneath. The upcoming Shaun the Sheep film works harder at arguing its sociological thesis. Maybe that shouldn’t matter. Beautifully made and impressively propulsive, Joker is one impressive hunk of nihilism. Full review DC

Almost every critic has called Amoo’s semi-autobiographical second feature the British Moonlight, and thematically and structurally there are unmistakable (and welcome) parallels with that Oscar-winning drama. A compelling coming-of-age chronicle, The Last Tree opens as 11-year-old Femi (Golding), a British boy of Nigerian heritage, leaves behind his idyllic rural foster home to join his mother in a south London high-rise. By the time he is a teenager, Femi (Adewunmi) is an angry young man who has fallen in with a bad crowd and who secretly listens to The Cure. The two actors’ powerful performances are perfectly aligned in this remarkable dramatic triptych. Full review TB

As Dolly Wells’s rough-hewn, heartful film debut opens, Lillian (Grace Van Patten of The Meyerowitz Stories, in a star-making turn) and her boyfriend are breaking up on account on her shocking lack of adulting skills. Lillian’s absent father, who is busy with his new girlfriend in France, is well connected enough to find his aimless daughter a spare room with a musician friend and his partner, Julia (Mortimer), a reclusive novelist. Within days Julia’s husband walks out, leaving the two nightmarishly mismatched women to exchange a series of terse handwritten house rules, notes that surprisingly and delightfully blossom into something like friendship. Full review TB

A young bride (Weaving, super) gets involved in a deadly game at her rich in-laws’ mansion. What the film lacks in characterisation it makes up in sheer, hurtling momentum. Weaving has irresistible Final Girl energy as an initially spooked character who gains superhuman resolution as the danger escalates. The film-makers also have a sure grasp of when to ease off the shackles and allow full grand guignol to kick in. Ready or Not is an absolute hoot. Full review DC

From the iconic swagger of The Right Stuff to the gals-at-home of Apollo 11, space travel is a butch business. Gray’s seventh feature is part of a strange subgenre, one that covers everything from Solaris to 2001 to Interstellar. Ad Astra is a ponderous, $80 million epic concerning Major Roy McBride (Pitt, never better), a cool-headed, slow-pulsed, emotionally stunted astronaut who is recruited to journey to Neptune. The mission: find the father (Jones, as brilliantly mad as a box of frogs) he believed was dead, as said patriarch is believed to be responsible for electrical pulses that may soon destroy Earth. At times the film is so thoughtful and interior, the dialogue sounds like it came from a classy mindfulness app. But its set pieces make for some of the most thrilling scenes of the year. Full review/trailer TB

Other ★★★★★ and ★★★★☆  films out and about: Dora and the Lost City of Gold, The Farewell, Hustlers, Once Upon a Time in . . . Hollywood, Pain and Glory. All current synopses here