New this weekend: Ready or Not, The Laundromat, Inna de Yard 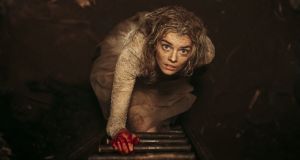 A death in the family: Samara Weaving in Ready or Not

READY OR NOT ★★★★☆
Directed by Matt Bettinelli-Olpin, Tyler Gillett. Starring Samara Weaving, Adam Brody, Mark O’Brien, Henry Czerny, Andie MacDowell, Melanie Scrofano, Kristian Bruun, Elyse Levesque, Nicky Guadagni. 16 cert, gen release, 95 min
A young bride (Weaving, super) gets involved in a deadly game at her rich in-laws’ mansion. What the film lacks in characterisation it makes up in sheer, hurtling momentum. Weaving has irresistible Final Girl energy as an initially spooked character who gains superhuman resolution as the danger escalates. The film-makers also have a sure grasp of when to ease off the shackles and allow full grand guignol to kick in. Ready or Not is an absolute hoot. Full review DC

Over the past decade, Steven Soderbergh has devoted his energy to a sketchy class of cinema that delights greatly in its own cleverness. That form continues with this amusing, often clever treatment of themes raised by the Panama Papers. The Laundromat starts well with its study of an widow (Streep) uncovering financial irregularities while seeking compensation for a boat accident. It then loses its way in a serious of enjoyable, sketchy vignettes on related financial outrages. Make a proper film again, Steven. Full review DC

In 1996, Buena Vista Social Club made global musical superstars of an ensemble of older Cuban musicians. Inna de Yard, like Wim Wenders’s much-loved doc, brings together reggae veterans for reminiscing and recording. The music does the talking As the marvellous Judy Mowatt has it, Jamaican history and music are intertwined: “If a man got shot, somebody would sing about it.” Other stars include Ken Boothe, made famous by the global hit Everything I Own, who speaks tenderly about his long-suffering wife; Winston McAnuff, who wrote the song Malcolm X (“white men get vexed”); Congos leader Cedric Myton, a man with a silky falsetto and 11 children; and Kiddus I, who was cast in the 1978 British cult movie Rockers only to be deported. As moving as it is toe-tapping. Full review TB

From the iconic swagger of The Right Stuff to the gals-at-home of Apollo 11, space travel is a butch business. Gray’s seventh feature is part of a strange subgenre, one that covers everything from Solaris to 2001 to Interstellar. Ad Astra is a ponderous, $80 million epic concerning Major Roy McBride (Pitt, never better), a cool-headed, slow-pulsed, emotionally stunted astronaut who is recruited to journey to Neptune. The mission: find the father (Jones, as brilliantly mad as a box of frogs) he believed was dead, as said patriarch is believed to be responsible for electrical pulses that may soon destroy Earth. At times the film is so thoughtful and interior, the dialogue sounds like it came from a classy mindfulness app. But its set pieces make for some of the most thrilling scenes of the year. TB

It doesn’t sound like a charming idea, but this delicate, moving Chinese-American comedy concerns a family of liars and a dying granny. Awkwafina plays Billi, an aspiring writer who learns that her beloved Nai Nai is terminally ill but who, crucially, doesn’t know it. Thus the family hastily arrange a wedding for Billi’s cousin and his Japanese fiancee, an occasion that will allow them to gather around Nai Nai in her home without signalling the severity of her condition. Horrorified Billi, however,is not invited lest she break down and give the game away. She turns up anyway, and the family holds a collective breath. Lulu Wang’s semi-autobiographical story is a lovely, warm family picture featuring a star-making turn from Awkwafina. Full review TB

So here come words we weren’t expecting to write: give Jenniffer Lopez the freaking Oscar for Best Supporting Actress now. The trailer for the tremendously entertaining Hustlers makes it look like a hen party extravaganza. But the film, in which dtrippers skim their Wall Street clientele using a heady mix of feminine wiles and MDMA, has far more wit and emotional heft. It’s a sturdy crime caper with an unexpectedly big heart and two tremendous performances: Wu works every acting muscle. Lopez, who is alternately maternal, sisterly, steeley and warm, reminds you that she has more old-school star wattage than Once Upon a Time in Hollywood’s Brad and Leo can muster together. Full review TB