The Goldfinch: A sedating film adaptation of Donna Tartt’s book 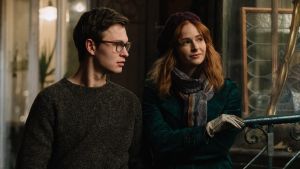 Hollywood has long wrestled with the perceived need to deliver “faithful” adaptations of the fat books everyone read last summer. In the internet age, the industry has become more frightened than ever of deviating from the sacred text. Twitter is always ready to burst a blood vessel at the eradication of this character or the rerouting of that plotline.

That’s how we end up with sedatives like The Goldfinch. You hardly need to be told that John Crowley’s film – released in time for an awards season it will watch from the dugout – is decorated with all the accoutrements of the prestige release.

Roger Deakins, among the industry’s most celebrated cinematographers, illuminates the dust particles and darkens the faces with a wintery grace that, appropriately enough, calls to mind the Dutch masters.

In a part of modest size, Nicole Kidman allows herself to be wheeled sedately from elegant living room to wood-panelled hall and, in the later stages, to be cosmetically aged-up to more or less her current age. Oakes Fegley grows up convincingly into Ansel Elgort. It’s attractive, adequately acted, smoothly edited and as dead as Carel Fabritius.

The prime motivation seems to be a need to get as much of Donna Tartt’s source novel on screen as possible. There is no sense of what it was about the book – bar its popularity – that convinced the filmmakers it deserved translation to the big screen.

Peter Straughn’s script does play with the chronology: the bombing in New York’s Metropolitan Museum that kills Theodore Decker’s mother and puts Fabritius’s eponymous painting his way is revisited and expanded throughout the film’s generous running time.

Straughn’s alterations are, however, merely a way of accommodating incidents from all corners of Theodore’s life. We get his friendship with cardiganed antique dealer Hobie (Jeffrey Wright). We get a vague sense of his passion for fellow survivor Pippa (Ashleigh Cummings). We get a fair bit of his sojourn in Las Vegas with best pal Boris (Finn Wolfhard and, later, Aneurin Barnard).

Any one of these incidents could, for a ruthless filmmaker, be expanded into feature length on its own. But that’s not how the adaptation game works these days. Straughn is not even prepared to excise a ludicrous central plot chicane that, extended over many pages and many years, caused more than one Tartt reader to send the book windmilling over left shoulder.

The author has acknowledged the influence of Dickens. The Goldfinch’s narrative felt, however, closer to the disordered randomness of early works such as Barnaby Rudge than the disciplined shape of Great Expectations. It seemed, in short, that she really was making it up as she went along.

Straughn’s tidier structure softens that impression, but the concomitant focus on character uncovers no angles to the story’s personalities. The film is more wedded to class structures than the recent Downton Abbey movie: stand-in mom Kidman is classy; Theodore’s dad is vulgar and materialistic.

Dickens would have made grotesques of such characters. The book and film render them as off-the-shelf types.

Throughout the picture, we sense that reluctance to light out for risky or unexpected territories. Trevor Gureckis’s incidental music takes an age to find its leisurely groove. So safe is the pop music supervision that, when representing errant youth, they fall back on New Order and Radiohead. It’s as if your dad dozed off with his iTunes on shuffle mode.

Yet the patina of superficial quality is so robust it’s hard to think of The Goldfinch as “a bad film” exactly. The filmmakers look to have made the movie they wanted to make: glossy, smooth, mellifluous. And they managed to get it done without deviating more than a lorry’s breadth from the source material. Some may see that as enough.

The Call of the Wild: Harrison Ford in one of his most engaging performances
7