Ad Astra: Brad Pitt has never been better than this

Review: James Gray’s arty sci-fi epic is not above including a thrilling chase scene 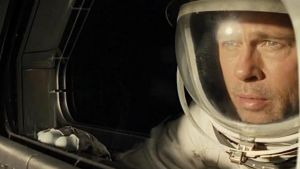 From the iconic swagger of The Right Stuff to the gals-at-home of Apollo 11, space travel is a butch business in the movieverse. Until now.

From the detailed wives of First Man to the math-busting heroes of Hidden Figures, there’s been a slow drift away from the vainglorious notion of the unflappable, coolly detached movie astronaut. And here comes James Gray, one of America’s most cerebral auteurs, to finally lay the trope to rest.

Gray is a fascinating film talent, one who thrived for many years on his reputation in Europe. Fair enough. His pet preoccupations – loyalty, patriarchy, obsession – and his way of bending conventional genre to serve philosophical concerns instantly recalls the classic Hollywood practitioners once championed by Cahier du Cinema.

Gray’s seventh feature is part of a strange subgenre, one that covers everything from Solaris to 2001: A Space Odyssey to Interstellar. My Big, Sprawling, Ponderous Space Opera.

The presence of Brad Pitt, hot on the heels of his turn in Tarantino’s Once Upon a Time in Hollywood might help. The 55-year-old actor has never been better than he is as Ad Astra’s Major Roy, a cool-headed, slow-pulsed, emotionally-stunted astronaut who is recruited to journey to Neptune, in search of the father (Tommy Lee Jones, as mad as a box of frogs) he believed was dead. Said patriarch is believed to be responsible for electrical pulses that may soon destroy the Earth. Cue Hollywood’s favourite theme: Why, Daddy, why?

There are obvious comparisons, as the director has noted, with Joseph Conrad’s Heart of Darkness. You know how it goes: journeying into the wilderness only to find yourself and your father figure.

At times the film is so thoughtful, so interior, the dialogue can sound like it came from a classy mindfulness app. Equally, one often wonders where the allegory begins and the space travel ends.

Getting told to live in the moment might have been unbearable in a film that wasn’t made by James Gray. But Ad Astra’s set pieces – a moon chase that would put Mad Max to shame, some monkey business we won’t spoil – make for some of the most thrilling scenes of the year.