Ready or Not is an absolute hoot of a bloody horror

Review: What this lacks in characterisation, it makes up in sheer, hurtling momentum 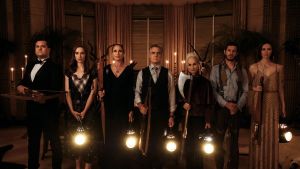 Film Title: Ready or Not

The big-house family murder is having a bit of a moment. Rian Johnson’s Knives Out – a breathlessly heightened Agatha Christie pastiche – has just premiered to huge acclaim at the Toronto International Film Festival. Before that arrives, audiences get to hoot at a silly, gruesome, captivating romp that makes a virtue of its own relentless derangement.

There’s an oddity in the credits. Ready or Not plays in similar territory to Ryan Murphy’s American Horror Story – camp, but horrid – and, sure enough, one Ryan Murphy is a co-writer. But it’s a different Ryan Murphy. Spooky.

Anyway, directed by Matt Bettinelli-Olpin and Tyler Gillett, young horror specialists, the picture casts Samara Weaving as Grace, bride to the well-off Daniel Le Domas (Adam Brody). It transpires that his people made their millions through board games – ah, different times! – and have woven the business into the rituals of family life.

Grace is asked to draw a card and join in the game it indicates. Everyone seems disproportionately unnerved when she reads the words “hide and seek”. Soon, for reasons that defy sane analysis, she is fleeing from axes, shotguns and crossbows.

Early on, somebody references F Scott Fitzgerald’s suggestion that “the rich are different”. Like Knives Out, the current film understands that, in such entertainments, the audience expects to hate and distrust the well-heeled elite. Those feelings make it so much easier to cheer when one or other gets a spear through the temple.

The characters are pretty thin, but good work by Andie MacDowell (toweringly grand society lady) and Kristian Bruun (useless in-law) add to the sense that this is clan that needs some culling.

What the film lacks in characterisation, it makes up in sheer, hurtling momentum. Weaving has irresistible Final-Girl energy as an initially spooked character who gains superhuman resolution as the danger escalates. The team also has a sure grasp of when to ease off the shackles and allow full grand guignol to kick in. There is a great deal of gore here, but (to shoehorn in an unlikely bit of Jean Luc-Godard) it’s “not blood, but red”.

Maybe a better comparison would be the violence of Tom and Jerry. At any rate, Ready or Not is an absolute hoot.