The Farewell: Warm family story about a lie rings true

Review: Awkwafina stars in this tale of a dying granny kept in the dark by her family 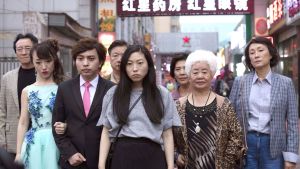 It doesn’t sound like a charming idea, but Lulu Wang’s delicate, moving Chinese-American dramedy concerns a family of liars and a dying granny. Rising star Awkwafina plays Billi, an aspiring writer who, as the film opens, is struggling to pay the rent and has just been rejected for a Guggenheim Fellowship.

Slumping into her parents’ house, Billi receives even worse news: her beloved Nai Nai (Zhao Shuzhen) is terminally ill. Crucially, she doesn’t know and her parents want to keep it that way. The family hastily arrange a wedding for Billi’s cousin Hao Hao and his Japanese fiancee, an occasion that will allow them to gather around Nai Nai at her Changchun home without signalling the severity of her condition.

As Billi’s pragmatic mother puts it: “Chinese people have a saying – when you get cancer, you die.”

Zhao Shuzhen is equally terrific as Nai Nai, a tough old bird with an intriguing history

Billi is horrified by the plan. She, being more assimilated than her parents, is not invited lest she break down and give the game away. So when she turns up regardless, the family hold a collective breath.

Lulu Wang’s semi-autobiographical story – “based on an actual lie”, as a pre-credit has it, and starring the writer-director’s great-aunt as herself – is a lovely, warm family picture featuring a star-making turn from Awkwafina, who is as nuanced here as she was flamboyant in Crazy Rich Asians. Her pining after Nai Nai is mirrored by her pining for the country where she was born. She momentarily blubs as she recalls being torn from China when she was six years old.

Zhao Shuzhen is equally terrific as Nai Nai, a tough old bird with an intriguing history. She has remarried the shuffling, silent Mr Li for company. At the wedding, former comrades pay her tribute for her efforts during the war. We learn she has been through many maids since Billi’s last visit. She even refers to Billi, her clear favourite, as “stupid girl” with genuine affection.

She bosses the wedding into shape, fighting with caterers along the way. She doesn’t rate the Japanese bride, even though the latter proves a paragon of smiling, good sportsmanship, one of many lovely details in the margins. Director of photography Anna Franquesa Solano finds a genuine beauty in Changchun’s high-rise blocks and urban sprawl.