Gugu Mbatha-Raw’s role in Misbehaviour, about the 1970 Miss World pageant, plays to her strengths 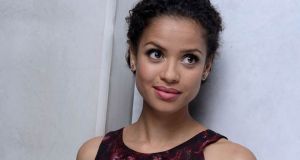 Gugu Mbatha-Raw: ‘It’s great having women in front of the camera... but I love that they are behind the camera as well’

Gugu Mbatha-Raw delicately walks across a London hotel suite. One can’t imagine her movements producing anything as noisy as footfall. If I didn’t know that she trained as a dancer I might have taken a guess.

“Being an only child, you know, my mom took me to dance classes as a way to be around other kids,” recalls the 36–year-old. “It was fun for me and I loved it and I wanted to do more, and then my dance school got a drama department. So then I wanted to do that and, you know, it was all very organic.

“My mom didn’t always love her job as a nurse. At times, she found it gruelling. So I always wanted to do something that I really enjoyed. And I mean, acting is a real privilege.”

Preparing the for the role, I obviously went back and watched the one in 1970. And that was really eye-opening

Mbatha-Raw is daughter of an English nurse and a South African doctor. Her dad, an anti-apartheid student activist with the ANC, was resettled in the UK by the UN. That politicised background has informed the “careful choices” she has made as an actor.

“Who knows where the seeds are planted?” she says. “But I do relish when the work is about something: not just entertainment for entertainment sake but something we can have a conversation around. I think that’s the point of artists. Art is supposed to sort of ask questions and reflect the society that we live in.”

Misbehaviour is very much in keeping with that idea. A real-life intersectionalist tale from recent feminist history, the new film from Bafta winner Philippa Lowthorpe concerns the 1970 Miss World contest at a moment when the now-unpopular meat market was hosted by Hollywood legend Bob Hope and watched by more than 100 million viewers around the world.

The nascent women’s liberation movement had other ideas. They cleverly hijacked the event by invading the stage and disrupting the broadcast in order to popularise the idea that beauty competitions demeaned women. When the event resumed, the final result was controversial: the winner was not the bookies’ favourite, Miss Sweden, but Miss Grenada, the first black woman to be crowned Miss World. It was a shock result, but it was the protesters who made the front pages.

Mbatha-Raw’s lack of familiarity with beauty pageant culture suggests they had a more lasting impact.

“To be honest with you, I haven’t seen a contemporary beauty contest,” says the actor. “Preparing the for the role, I obviously went back and watched the one in 1970. And that was really eye-opening. That was the first Miss World pageant that I’d ever seen. And just to see the objectification and hear the language Bob Hope was using and the misogynistic tone and the jokes and all the things that nowadays would just not fly – it was just so offensive.”

Producer Suzanne Mackey and screenwriter Rebecca Frayne have been developing the film since 2010 when they heard the BBC Radio 4 documentary The Reunion, a show that brought together Sally Alexander and Jo Robinson, two of the protesters from the women’s liberation movement, and Jennifer Hosten, the winner of Miss World 1970.

“When I first read the script, it had everything,” says Mbatha-Raw. “First and foremost, it was so entertaining. It was sort of sparkly and it made me chuckle and feel really uplifted. But that there’s a weight to it because it’s a true story and it marks a collision of the 1970s feminist movement and the first woman of colour being awarded Miss World. I just thought it was a delicious combination.”

Misbehaviour casts Mbatha-Raw alongside Keira Knightley, Keeley Hawes, Leslie Manville and Jessie Buckley. It’s the latest in a series of female-oriented and female-populated projects for the actor. An early #MeToo and Time’s Up activist, she appeared with Jennifer Aniston and Reese Witherspoon in the pertinently themed The Morning Show.

“Something like The Morning Show, which, you know, dealt with sexual assault, and my character had quite an emotionally traumatising storyline, that energy stays with you for a little while.”

That’s the wonderful thing about Me Too: it’s empowering women by bringing them together

She also starred with Oprah Winfrey and Mindy Kaling in the decidedly less harrowing A Wrinkle in Time, Ava DuVernay’s 2018 all-ages adventure.

“That hasn’t happened by accident,” says Mbatha-Raw. “What thrilled me about Misbehaviour in particular was that you had this incredible cast of women but also Philippa Lowthorpe, our director, and Suzanne Mackie, our producer. Then the script is written by women. For me this is sort of becoming the norm and I hope that will continue.

“It’s great having women in front of the camera, especially given the themes of this film, but I love that they are behind the camera as well. That’s the wonderful thing about Me Too: it’s about solidarity. It’s empowering women by bringing them together. And it has become so much bigger than just the industry.”

I loved working with Joe Swanberg. What excited me about the way that he works is that it’s all improvised

Having graduated from RADA, Mbatha-Raw quickly found work in such British telly staples as Doctor Who and Marple. In 2005 she played Octavia in Antony and Cleopatra and Juliet opposite Andrew Garfield’s Romeo at the Royal Exchange Theatre. She landed her first Hollywood role in Larry Crowne, a romantic comedy starring it’s writer-director, Tom Hanks.

“I mean, I remember the first time I met Tom Hanks, you know, and he popped his head around the door sort of in a comedic kind of way that immediately disarmed me and made me laugh,” she recalls. “I think people like that are aware of their star power quality. So they want to put you at ease. But, as an actor, you soon realise that everybody is in same boat to a degree. We all have to start somewhere.”

Mbatha-Raw spent eight years circling Belle before that film established her as a headlining star. Amma Assante’s 2013 biopic of Dido Elizabeth Belle, a mixed-race noblewoman in 18th-century England, was championed by Oprah in the US. Prince turned up to play at the American premiere.

“It was a blast,” she says. “I have very vivid memories of that time. Luckily I had been working solidly for a long time before then. I’d been at drama school, I’d done theatre, I had, you know, a body of work behind me. So it didn’t overwhelm me, I felt prepared for it at that time. I’d been wanting to do that role for a really long time. So to have your instincts validated and have other people respond to it showed I was right to be patient and persistent.”

She has consolidated her stardom with roles in Beauty and the Beast, Jupiter Ascending, Miss Sloane, Motherless Brooklyn and the much-praised San Junipero episode of Black Mirror. She continues to juggle the grander budgets of Disney’s incoming Loki TV series and Joe Swanberg’s improvised lo-fi Netflix series Easy.

“I loved working with Joe Swanberg, ” she says. “What excited me about the way that he works is that it’s all improvised. So you don’t have scripted lines. And I’d never done that before. So you come up with the character and you come up with this scenario, and there’s sort of an outline for what happens in a scene.

“But he just keeps the camera rolling and the scene can take you anywhere. In film, everybody’s trying to fabricate something that feels like it happened for the first time. With Joe Swanberg, it’s real lightning in a bottle.”

Misbehaviour is in cinemas now