Why are the movie industry and critics still weirdly resistant to female directors? 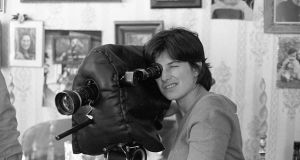 Sadly, when compiling a list of 10 great films by women, a bit more digging is required than would be necessary if putting together an equivalent list of novels. With apologies to Mr Dickens, a fair-minded chart of the best 19th century British novels could reach down to the second half of the top 10 without worrying male writers. A George Eliot here. A bit of Jane Austen there. Some Brontë action. A bit of Mrs Gaskell. You see my point.

The industry and the critical fraternity are, however, still weirdly resistant to female directors. Women have always edited. There are more writers than there used to be. But progress behind the camera has been excruciatingly slow.

Speaking to The Irish Times earlier this year, Marielle Heller, director of Can You Ever Forgive Me? and A Beautiful Day in the Neighbourhood, remained puzzled at the glacial progress. “Ah, I wish I had a simple answer,” she said. “It’s so many things. I think people have a conception of what a director looks like that’s hard to get rid of -– an older white man with a baseball cap. People don’t look at me and think, ‘she might be a director’. Visibility matters. Seeing women behind the camera matters. I think it will happen. As you say, it will go forwards and backwards.”

Anyway, for all the obstacles, there is still a wealth of great films out there by women. So much so that I wouldn’t dream of attempting a “10 best”. This is merely a list of 10 great films that come to mind. There’s another bunch at the end of the article. For further tips seek out Mark Cousins’s mammoth series Women Make Film.

Meshes of the Afternoon

We’re cheating a bit here. Deren’s drifty, peculiar masterpiece doesn’t meet any of the common criteria for a feature. But, clocking in at an economic 15 minutes, it has had more influence on the wilder corners of the art than Deren can ever have hoped. The director’s enthusiasts will also argue for the later At Land and A Study in Choreography for Camera. Watch Meshes here.

It’s almost exactly a year since the great avant garde Czech director Vera Chytilová (pictures above) died. She had a varied career, but no picture had quite the impact of this vibrantly off-centre comic whirligig from 1966. The authorities were so upset by its oddness that she didn’t work in her home country for another decade. Watch the whole film on Amazon Prime.

We also lost the great Belgian film-maker Chantal Akerman last year. But we have one of the untouchable documents of the female experience to savour and parse forever. It’s a famously gruelling piece that studies the drudgery of a wrung-out homemaker’s life in painstaking detail. The eventual dramatic conclusion is all the more shocking for the steadiness of the preparation. Watch a section of the movie here.

We rightly revere Elem Klimov’s Come and See, but he was far from the first Russian director to engage viscerally with the horrors of the Great Patriotic War. Based on an admired novel by Vasil Bykau, The Ascent, like Come and See, spends its wretched hours on the Belorussian front. Tense, horrible, original. Watch a clip of The Ascent here

The Hurt Locker was a fine film. The politically iffy Zero Dark Thirty may have been even better. But Bigelow’s earlier films remain the ones to seek out. Point Break is indestructible. The Loveless is a fascinating post-Scorpio Rising experiment. We are, however, sticking with Bigelow’s singular late-Reagan vampire flick. Rough, horrible and properly odd.

An Angel at my Table

Originally produced as a TV series, Campion’s translation of Janet Frame’s autobiographies announced a new talent to the world. The terrific Sweetie followed. She then became the first woman to win the Palme d’Or with The Piano. Bright Star made up for the bizarre hiccups that were Portrait of a Lady and (weirder still) In the Cut.

This still remains a controversial choice. Though it was a critical smash at the time, there are many who worry about the hints of Orientalism and its nagging deadness. Fair points. It still seems to me a film that caught the mood of its time. Just look at how, in the recent horror The Forest, the film-makers couldn’t fail to ape its shots of Tokyo at night. A compromised classic.

We Need to Talk About Kevin

Another mildly controversial choice. The Scottish film-maker’s earlier, more “difficult” works – Ratcatcher and Morvern Callar – are more critically respectable, but her stunning adaptation of Lionel Shriver’s latter-day sensation novel feels like the coming together of a mighty talent. A fine work of provocative subjectivity.

Another Australian. Kent’s directorial debut accidentally became part of an unexpected renaissance for horror that also takes in such very different films as Goodnight Mommy, It Follows and The Witch. Her film tackles the pressures of parenthood as it engages with a sinister children’s book that may tell horrible truths about the real world.

How delightful that something so gentle, something so generous could become a defining film of the age. Saoirse Ronan excels as a Californian teen who dreams of a Bohemian life in distant New York. She’s a bit pretentious. Her grand schemes seem doomed to failure. But, like a latter-day Huck Finn, Christine “Lady Bird” McPherson emerges as a living advertisement for the joys of being human.

And honourable mentions to . . .