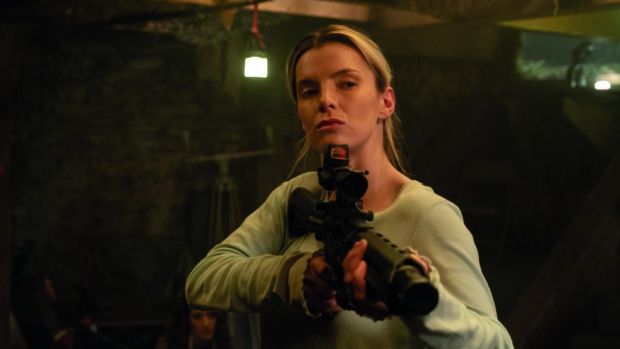 Betty Gilpin as Crystal in The Hunt, directed by Craig Zobel

It’s here. The Blumhouse shocker that is (depending upon which nut you heed) either a right-wing screed or a liberal wet dream has finally made it into cinemas.

Originally scheduled for release in September, the picture has already drawn ire from those who haven’t seen it. No less a premature critic than D Trump, well-known stable genius, took to the Twitter. “Liberal Hollywood is Racist at the highest level,” he oinked. “The movie coming out is made in order to inflame and cause chaos.”

Even before that tweet emerged, Universal Pictures had, in the wake of the El Paso and Dayton shootings, elected to delay the release, but The Hunt was soundly tagged as That Liberal Film Donald Trump Hates.

The synopsis hardly points in that direction. Loosely based on Richard Connell’s much-adapted story The Most Dangerous Game, the picture concerns a cadre of right-on liberals – keen on bleeding the hearts of others in this case – who kidnap a party of red-meat republicans and hunt them for sport. It doesn’t sound as if the left are exactly the good guys here.

If The Hunt is right-wing propaganda then it is of a sort that liberals have long feared, but have not yet come close to seeing. Forget those paranoid documentaries about Hillary’s lizard army and those dystopian dramas featuring Kelsey Grammer as a “woke” demagogue. Craig Zobel’s breathless film is stuffed with delicious jokes and eye-watering Tom-and-Jerry violence.

It features a scenery-gobbling performance by a two-time Oscar winner and an even better one by a rising TV star. If the object is indoctrination then they are going the right way about it.

In truth, The Hunt is something much more controversial than that. As social media divides the world’s populace into ever-more discrete camps, the picture dares – as the best satire should – to take digs at absurdities on all sides. But the liberals probably do get the worst of it.

The picture works as sense-of-humour detector. Take the scene that finds the left-wing hunters chatting idly as their human prey wait to get annihilated in the coldest of blood. “Oh, Ava DuVernay liked one of my posts,” someone says.

Elsewhere, Amy Madigan – left-wing enough to remain stubbornly seated when blacklist collaborator Elia Kazan got his honorary Oscar – plays a participant who debates acceptable terms for African-Americans before attempting another brutal slaying. It’s okay. If Amy can laugh along then so can you. The satire of complacent, self-righteous liberals who snort when rural Republicans spell “there” as “their” chimes melodiously with at least one strand in Blumhouse’s impeccably liberal Get Out.

Betty Gilpin, star of Netflix’s GLOW, is just super as the most resourceful of the hunted. Made up to look a little like Ivanka, at home to a disturbing subsonic mutter, she relishes telling a revamped version of the Tortoise and the Hare that, in keeping with Trumpian logic, has the jackrabbit take revenge in the most brutal manner. Her eventual showdown with deranged Hilary Swank (sorry if you were expecting the double Oscar winner to be Maggie Smith) employs a kinetic invention that might draw approval from even Jackie Chan.

If The Hunt is about anything it is about the way online discourse forces users towards unnecessary extremes (you centrist scum!). We eventually learn that the scheme is a social-media fantasy made ghastly reality. Lies end up generating reflective truths. Donald Trump, without seeing The Hunt, makes the film into something that it most certainly isn’t. And so on.

Such developments might suggest that real life is no less absurd than this fiction. It is certainly as violent. But everyday activity is rarely so entertaining as the careering action that Zobel and his team have assembled. Appalling, irresponsible, reprehensible – and darn good fun. Don’t ban this sick filth.