And Then We Danced: A film full of life, emotion and uninhibited sexuality

Review: Having endured riots at domestic screenings, it has earned our more sober attentions 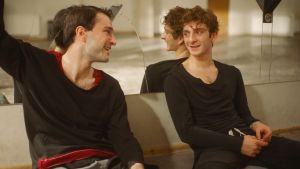 And Then We Danced: director Levan Akin does an excellent job of fleshing out the relationships and showing us all the local colour

Film Title: And Then We Danced

Flann O’Brien once accused Gaelic purist of regarding “Irish dancing as a sovereign spiritual and nationalistic prophylactic”. His moral guardians felt that, rather than encouraging the urge to rub unmentionables, dance offered a public alternative to continental unpleasantness.

Such thoughts bubble up early on in Levan Akin’s delightful drama from another country that has allowed national identity to get in the way of sexual expression. “There is no sexuality in Georgian dance,” an instructor bellows at his charges in a prestigious dance company. This is a medium for telling stories and honouring heritage.

Merab (Levan Gelbakhiani), a talented young dancer with an impish face, can only nod along to the barked dicta, but his own sexuality will soon get in the way of his progress. Early on it is established that being gay remains a sackable offence in this country. Even the traditionally open-minded world of dance is shut off to same-sex relationships. All has gone well so far for Merab. His grandmother and his parents were dancers before him. He has shown greater application than his layabout brother. The arrival of the charismatic Irakli (Bachi Valishvili), a good-looking competitor with a past, sets him along a new, potentially ruinous path.

There is nothing hugely unexpected in the story. The final act of defiance feels inevitable from the opening half hour. But Akin does an excellent job of fleshing out the relationships and showing us all the local colour. As a Swede of Georgian descent, he has an outsider’s eye that draws us towards unexpected vistas and surprising interactions. Tbilisi comes across as an attractive city: wooden balconies opening onto busy sunlit streets.

The young people fashion a bohemian lifestyle that seems perfectly agreeable to the foreign viewer. But there is an undeniable sense of longing for other lives. One young woman replaces Georgian cigarettes in an British box long after the exotic English tabs have been exhausted. They speak of London as Chekhov’s Three Sisters speak of Moscow.

Gelbakhiani is so charming and so elegant that we hardly mind the plot’s pedestrian progress to an expected destination. And Then We Danced is a film full of life, emotion and – though the authorities may not like to hear it – uninhibited sexuality. Having endured riots at domestic screenings, it has earned our more sober attentions.