Review: Tense, well-acted drama about mad hoodlums starts to drift towards the end 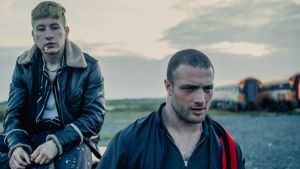 Barry Keoghan and Cosmo Jarvis in Calm with Horses

Nick Rowland has created an impressively spooky version of County Nowhere in this tense, well-acted variation on a Colin Barrett story about mad hoodlums and the sorrow they cause. We don’t know quite where this rural Hades sits. Some accents are from the deep West. Others wander towards the Border counties. The only sure thing is that Cork – mentioned as a potential source of escape – seems to be a long, long way away. The narcissism of small differences is a powerful thing.

Cosmo Jarvis is hypnotically strong as a hulking, erratically tempered bruiser named Arm. He and his irresponsible pal Dympna (Barry Keoghan), agents of the horrible Dympna clan, get drawn into the worst sort of mayhem when asked to respond to the apparent mistreatment of a girl at a house party. His reluctance to go the whole way has potentially awful consequences.

Shot in shades of watery uncertainty by the always reliable Piers McGrail, Calm with Horses cannot be faulted for atmosphere or for its world-building. Grasping his accent in two mighty fists, Jarvis gives us a poetic toughie for the ages: a man who looks as if he’d rather whisper your eulogy than beat you to death. Ever the emperor of restlessness, Barry Keoghan is better still as the attendant sprite who has a bad answer for every good question.

As much a domestic drama as a crime film, Calm with Horses does more sound work in anatomising the relationship between Arm and his girlfriend Ursula (Niamh Algar). They have an autistic child and only relocation to distant Cork will provide the care he needs.

The actors rattle effectively round a setting that – notably the lakeside den occupied by mad Ned Dennehy – sometimes has the quality of a grim fantasyland. Terrible things hang from blameless gables.

None of this can, however, compensate for a sense of drift that sets in over the last 20 minutes. Without any original way to end the action, the screenplay settles for a contrived interior set-piece that plays to the sound of tension leaking from the metaphorical balloon. Full marks for character and setting. Less enthusiastic hurrahs for narrative arc.

Naoise Dolan: My personal life is nobody else’s business
8