My Spy review: The best nonsensical family comedy out there 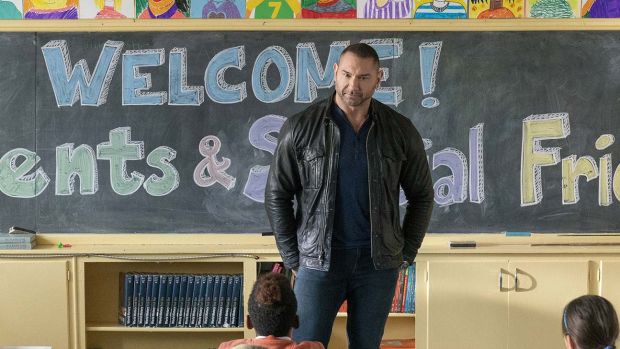 Dave Bautista in My Spy

Ex-marine and professional tough guy JJ is too blunt an instrument for the CIA. After botching an undercover operation characterised by dodgy accents and an ill-defined weapon of mass destruction, JJ is kicked down to surveillance duties in Chicago. He grunts as his new fangirl partner, Bobbi (Flight of the Conchords’ Kristen Schaal) attempts to make chit-chat. He grunts some more when he and Bobbi are discovered by the nine-year-old daughter of the family they are supposed to be staking out.

Sophie (Chloe Coleman), who grew up in France, is struggling to fit in at her new American school. Having a large spy to blackmail into going ice-skating can only help her social standing. As Sophie attempts to pair JJ up with her widowed mother, her evil uncle is still working on that ill-defined weapon of mass destruction subplot. Stay tuned for villainous monologues in which the bad guy outlines the plot and his twisted intentions.

Former wrestler and current Guardian of the Galaxy Dave Bautista attempts to follow Dwayne Johnson out of the ring and into your heart with this cute family comedy. Depending on your age, this is either his Kindergarten Cop or his Tooth Fairy. There are enough mild swear words and bloodless fight scenes to tip the film into 12A territory. But the ideal audience – presuming they don’t have parents who hold their ears lest they be exposed to bad language – ought to be the same age as the wily heroine for maximum wish-fulfilment kicks.

The script, written by Jon and Erich Hoeber, is nonsense, but it’s the best darned nonsense it can be. In keeping with the headliner’s range, My Spy knows its limitations. Still, it deftly balances well-directed action sequences – with a few nods to Indiana Jones – and sentimental family drama. There are nice sporting turns from Jeong and Schaal and some unmissable dad dancing from Bautista. Opens on May 13th

Why I was drawn to Wuthering Heights by Emily Brontë