‘I was surprised so many people were homophobic by default’ 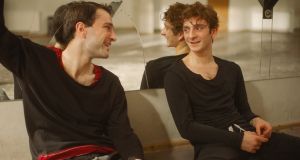 And Then We Danced: Levan Gelbakhiani (left) plays a dancer at the National Georgian Ensemble who falls head-over-heels for a new student

It is jarring to think that, at one edge of Europe, exhibition of a motion picture can still lead to public disturbances. It’s genuinely alarming to hear that such disputes can be triggered by something so harmless as representation of a same-sex relationship.

Since its premiere at Cannes in 2019, Levan Akin’s And Then We Danced has become something of a cause célèbre in its native Georgia. Levan Gelbakhiani plays a dancer at the National Georgian Ensemble who falls head-over-heels for a new student. It’s a charming, ambling picture that largely eschews social commentary for a celebration of culture and an embrace of strong feeling. But the ructions have been noisy.

Levan, born in Sweden to Georgian parents, knew that a backlash was likely.

“In 2013, They tried to have a Gay Pride parade in Georgia,” he remembers. “There were 50 people and they were attacked by 20,000 counter-demonstrators – organised by the Orthodox Church and far-right groups. The images were really brutal. It was all over the news. In 2016, I decided to go to Georgia and research the situation for LGBTQ people and this grew out of that. I wanted to make something that felt hopeful.”

'You can’t get a job and be openly gay. If you apply to university and say you’re living with your boyfriend that’s not possible'

He has managed that. The film played to a rousing ovation at Cannes and went on to receive universally positive reviews. It was chosen as Sweden’s entry to the race for best international film at the Oscars (Gelbakhiani tells me that there was never a serious conversation about it being the Georgian entry).

And it has helped change the conversation. But there was quite the hoo-ha when screenings were announced at home last autumn. Various conservative and pro-Russian campaigned to shut down the event. Sandro Bregadze, head the nationalist party Georgian March, said the film went “against Georgian and Christian traditions and values and popularises the sin of sodomy”.

The protests got ugly.

“They were outside trying to stop people from coming in to see it,” he says. “A few people were injured, but not severely. It was a very aggressive moment.”

How surprised was he by all this? As someone connected to Georgian culture – indeed, inspired by a homophobic incident in that country – he must have been prepared for the ill feeling.

“I was surprised in a way because Georgia is so divided in many senses,” he says. “It’s very progressive in some ways. It is the most forward-looking country in that region. I was a little surprised, though, that so many people were homophobic by default. That’s just because there had not been any representation of LGBTQ people in society. You can’t get a job and be openly gay. If you apply to university and say you’re living with your boyfriend that’s not possible. It’s not illegal or anything. But that’s how society is. You can be ostracised.”

Not surprisingly, Levan encountered difficulties while shooting the film in Tbilisi. One of their two choreographers is listed as “anonymous” on the credits as involvement with the film could lose them their job. Everyday deceits were concocted to cover the film’s subject matter.

“Thankfully, our Georgian producer kept it going,” he says. “She was very inventive in how she navigated all the problems that would always arise. We would have to change locations on a day’s notice because all of a sudden they would make up excuses – because they would find out what we were actually doing. ‘Oh, no, we’re renovating’ or whatever. It was a very different kind of shoot. I had to be very flexible, very spontaneous.”

Now 40, Levan began his career directing Swedish TV shows such as Anno 1790 and Genuine People. With a home population of just three million, Georgia does not have a massive diaspora, but communities are forming in Scandinavia and other points west.

“Where I grew up there was nobody except us and one other family,” he says. “There are more now. But you don’t have quite the spread of people across the world you get from, say, Armenia.”

Levan took his preparations seriously. He called upon experts from all fields. His cast is largely drawn from local actors. But nonetheless he couldn’t claim to have been raised in Georgian air. He was bringing an outsider’s eye to a complex and controversial issue.

“Well, I feel like outsider wherever I am,” he says with a laugh. “Because I’m not really Georgian and I’m not really Swedish. And I think that perspective helped this film become what it became – because I saw things very differently than if I would had been right in the fabric of society. I think that is good in some ways.”

'I think it has it has been really embraced by a lot of people, young and old. So that’s been really, really nice'

He may find himself stranded between his Swedish background and his Georgian heritage, but, in one sense, he is very much part of Scandinavian aristocracy. We would be rightfully offended if any visiting journalist assumed that every random Irish person knew Bono, but it transpires that Akin really does know Abba.

Benny Andersson of those Swedish legends helped produce his second film The Circle and an Abba track – Take a Chance on Me, since you ask – plays in And Then We Danced. I’m assuming Benny helped him with that.

“He worked on my last movie – he did the original soundtrack to that and his son Ludwig is one of the producers on this film,” he says. “That track would have cost more than the whole shoot. He liked the film enough to let us have that. He does do much good stuff and he works from a place of curiosity at all times. That’s the key to being creative.”

Levan was happy with his work on And Then We Danced, but he was still surprised to land in Directors Fortnight at Cannes. He had just finished the film and the public screening was the first time that the cast got to see it. That publicity also, of course, got the movie noticed back in Georgia.

Akin seems torn as to the direction Georgian society is taking. He talks about the continuing difficulties of living life as a gay person in that country, but he does believe that And Then We Danced has helped accelerate changes that were already underway.

But then he gets back to those protests.

“We only managed to screen it for two days, because there was so many riots outside. The BBC and the New York Times and all the magazines wrote about us trying to have that premiere. So, it was pretty intense. But we managed to have three days of screening. And now it will be on streaming platforms. So, people will get to see it.”

I wonder if the cast encountered difficulties after the screening. They must have gained some level of celebrity.

“All of them live there,” he says. “We were worried that it would be difficult for them. Even though we had a very low budget, we had some money put aside for them so that they could go away for a while. They wanted to, and they did go away after Cannes. They were travelling for a couple of months. Now it feels like it’s settled down. People want to take pictures of them.”

We can end on an upbeat note then?

“Oh, the news cycle is so fast there,” he says. “I feel already this film is not such a big deal. It is sort of fading away. There are going to be new problems and new stuff to get angry about.”

And Then we Danced is on limited release from March 13th