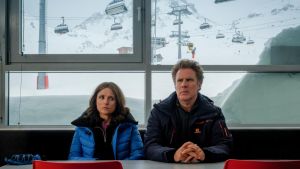 Julia Louis-Dreyfus and Will Ferrell in the film Downhill. Photograph: Jaap Buitendijk

When news emerged that Hollywood was remaking Ruben Östlund’s Force Majeure — a hit at Cannes in 2014 — the big serious film community swooned like a collective maiden aunt. Won’t someone think of the cineastes?

On reflection, a film in which Will Ferrell abandons Julia Louis-Dreyfus to an apparent avalanche and crumbles at the subsequent moral inquisition is not an absolutely terrible idea. There are sure to be some awkward laughs there. If we can pretend that Force Majeure never existed, we might have a nice enough time. So it proves.

Nat Faxon and Jim Rash, who gave us The Way Way Back in 2013, have wisely brought the characters back to the Alps. A version in, say, Aspen would deprive Downhill of its best new tune: The Ballad of The Ugly Americans Abroad.

When Billie and Pete Staunton arrive at the soulless ski resort they are surprised to discover that nobody else has brought children. Their first encounter is with a deliciously vulgar Miranda Otto — the travel rep from Hades — whose disarming sexual frankness speaks to middle-American perceptions (if not reality) about “continental” licence.

Billie’s anger at the controlled avalanche permits some fun with the US passion for complaining about perceived deficiencies in service. And so forth.

This material is so amusing that one half-wishes they’d just made a lowbrow film about two idiots making fools of themselves in Austria. That approach worked just fine for National Lampoon. But we have a philosophical comedy about guilt and the impossibility of true connection to remake.

Fans of Louis-Dreyfus who have yet to catch Force Majeure may remember the scenario from the episode of Seinfeld in which George flees a fire at a children’s party (some critics have detected more elevated origins in the Ernest Hemingway story The Short Happy Life of Francis Macomber). The family is eating on an exposed balcony as a rush of snow looks set to overpower them. Pete abandons the group, returns without apology when all seems safe, and spends the rest of the drama trying to avoid confrontation.

The embarrassment and awkwardness keep the suspiciously short film alive — 86 minutes suggests panicked cuts — but the deep, dark irony of the source material is sorely missing. Östlund’s film invited speculation about the lies the couple have been telling each other for years. The characters here are so thin that no such digging seems worthwhile.

Full of salty asides such as that in which the characters compare the too-perfect scenery to a “stock photograph,” Downhill works hard at its superficial satire, but never allows the frayed relationships to gain traction.

Worth seeing. Which is not the same as saying it was worth making.

Bored at home? How about becoming a classic movie character?
8