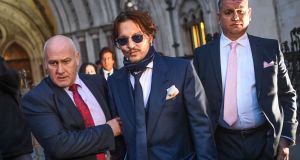 The texts were read out during Mr Depp’s libel action against the Sun newspaper, after it published an article in 2018 in which it claimed Mr Depp assaulted Ms Heard. Mr Depp’s previous legal team accidentally shared an archive of 70,000 messages with the Sun’s lawyers.

Further texts from Mr Depp to Mr Bettany, apparently referring to a flight, read: “I’m gonna properly stop the booze thing, darling... Drank all night before I picked Amber up to fly to LA, this past Sunday... Ugly, mate... No food for days... powders... half a bottle of whiskey, a thousand red bull and vodkas, pills, 2 bottles of Champers on plane and what do you get???... An angry, aggro Injun in a f**kin’ blackout, screaming obscenities and insulting any f**k who got near... I’m done... I am admittedly too f**ked in the head to spray my rage at the one I love... For little reason, as well I’m too old to be that guy. But, pills are fine!!!”

The texts have been presented as part of the Sun’s case that Mr Depp was abusive towards Ms Heard, which Mr Depp denies. They centre on Ms Heard’s claim that Mr Depp abused her on a private plane flight in May 2014. Mr Depp’s lawyer’s contention is that they show the opposite.

Mr Depp is also suing Ms Heard for defamation in the US over an article she wrote in the Washington Post. – Guardian