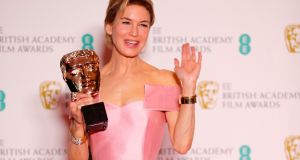 US actress Renee Zellweger poses with the award for a Leading Actress for her work on the film ‘Judy’ at the BAFTA British Academy Film Awards. Photograph: by Adrian Dennis/AFP/Getty Images)

To no great astonishment, Sam Mendes’s 1917 won best film at the British Film and Television Academy Awards (Baftas) on Sunday night. Detailing a soldier’s efforts to deliver a message in disputed territory during the first World War, the propulsive picture – edited to appear as one continuous shot – now looks a strong favourite to take the best picture Oscar in a week’s time.

The film easily passed out competitors, scoring seven wins – also including best director and best British film – in a night that spread the rest of the love thinly. Roger Deakins, winning best cinematography for conspicuous trickery in 1917, said: “I think it was George Orwell who said all films are special but some films are more special than others. For me this is real special.”

Mendes, who cut his teeth doing theatre in London, nodded towards the surrounding metropolis. “It’s a war movie that we made, but it’s also about home and family. It’s so moving to get this award in my hometown for the first time,” he said.

Two Irish actors lost out in the best actress category. Saoirse Ronan was up for Little Women, while Jessie Buckley competed for Wild Rose, but Renée Zellweger, showy as Judy Garland in Judy, was always the strong favourite and she duly took the award. Buckley, a fast-rising Kerry star, did, however, have her moment when she wowed the audience with a song from Wild Rose. Zellweger commented: “Sharing this evening with you is among my life’s great blessings. Miss Garland, London town, which you have always loved so much, loves you back. This is for you.”

Brad Pitt won best supporting actor award for Once Upon a Time in… Hollywood, but, unable to attend, he dispatched Margot Robbie to receive the Bafta mask from Scarlett Johansson. His prepared statement featured an excellent Brexit joke. “Hey Britain, heard you just became single, welcome to the club,” Robbie relayed.

The reliably intense Joaquin Phoenix grabbed best actor for his performance as the title character in Joker. When accepting, he made the evening’s most conspicuous reference to Bafta’s failure to nominate a single person of colour this year. “I am very honoured and privileged to be here,” he said. “I also feel conflicted because so many of my fellow actors that are deserving don’t have that same privilege. I think we send a very clear message to people of colour that you’re not welcome here.” The controversy has drawn much comment, but the explicitness of Phoenix’s comments was unexpected. He was heard in nervous silence.

Laura Dern, daughter of Hollywood royalty Bruce Dern and Diane Ladd, won best supporting actress for her role as a ruthless lawyer in Marriage Story. “My mom told me it’s what friends give you to congratulate you because you did a good job,” she said of the award. She went on to hail “all the things I love about this country. RADA… my aunt… Peter Sellers….” Zellweger, Phoenix, Dern and Pitt are all now unbackable odds-on favourites for the corresponding Oscars.

Bafta history was made with the first ever award for “casting” going to Shayna Markowitz for Joker. The British Academy is one of the few major awards bodies to acknowledge this vital part of the filmmaking process. The closest thing to a shock was Netflix’s Klaus beating Pixar’s Toy Story 4 to best animated feature.

“There’s more than one Irishman here tonight that seems to go on and on,” he began, referring to Martin Scorsese’s three-and-a-half-hour epic. Norton also alluded to the controversy surrounding lack of diversity. This season will be “remembered as the year white men broke through”, he noted. “Eleven nominations for Joker – essentially the story of a white man who makes himself even whiter.”

The most amusing bit of self-deprecation came from Australian actor Rebel Wilson. “I made this dress by sewing two old dresses together,” star of a recent feline flop said. “The red is from that one time I didn’t win Miss Australia. And the black is from a funeral I just went to for the feature film Cats.”

The British and American Academies share around 500 members. Worthwhile conclusions about the more prominent awards can thus be drawn from their cousins in the Old World. It has, however, been seven years since both bodies agreed on best film. Mendes’s picture has also won with the Director’s Guild of America and the Golden Globes, but Bong Joon Ho’s Parasite is coming up on the inner rail.

A first ever win at the Oscars for a film not in the English language remains a possibility. The Korean picture won best foreign language film and best screenplay at the Baftas. Bong noted he “didn’t expect this at all because the script is written in a foreign language”. The win for foreign film generated notable applause.

This was, however, unquestionably 1917’s night.