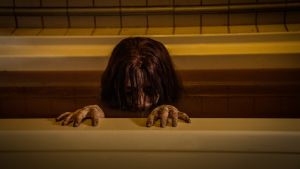 The Grudge: redundant reboot of a remake of Ju-On: The Grudge

This reboot of a remake of Ju-On: The Grudge – itself a 2002 puree of two earlier films whizzed up to cash in on the post-Ringu J-horror rush – arrives with an unlikely degree of pedigree.

Director and co-writer Nicolas Pesce, who won rave reviews with his theatrical debut, The Eyes of My Mother, has assembled a crack ensemble cast to squander everyone’s best efforts on this tedious horror film. We say horror: we counted half a jump scare.

“When someone dies in the grip of rage,” reads an introductory title, “...a curse in born.” But what did the cast and crew do to deserve this?

Andrea Riseborough stars a recently widowed police detective, who, embarking on a fresh start with her young son, encounters a miffed ghost recently transplanted from Japan.

Workmanlike dialogue – “Isn’t that the psychiatric hospital?” – advances her investigation into a cursed house, a dull-looking dwelling that lacks the character of the original Saeki House. Mostly, Riseborough juggles files and stares at her computer as a framing device for three back stories in which other capable actors – John Cho, Lin Shaye – are as wasted as she is.

No film featuring Jacki Weaver as a post-Tangina euthanasia assistant ought to be as boring as The Grudge 2020. But even the playful chronology can’t mask the mediocrity and impotence of the material. None of the characters or choppily assembled subplots linger on screen long enough to make any kind of emotional impact. The original folkloric concept of the vengeful Japanese ghost (Onry?) is lost in translation. Potentially interesting religious and philosophical dimensions – novenas in the dashboard, Jesus on the telly, the notion that the ghost evidences an afterlife – are swiftly discarded by this wholly redundant reboot.

The Hundred Years’ War on Palestine: ‘no such thing as a Palestinian’
Real news has value SUBSCRIBE