New this weekend: The Personal History of David Copperfield, Weathering with You 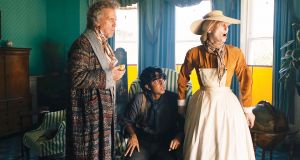 THE PERSONAL HISTORY OF DAVID COPPERFIELD ★★★★★
Directed by Armando Iannucci. Starring Dev Patel, Tilda Swinton, Hugh Laurie, Peter Capaldi, Ben Whishaw, Bronagh Gallagher, Paul Whitehouse, Aneurin Barnard, Daisy May Cooper, Benedict Wong, Gwendoline Christie, Rosaleen Linehan. PG cert, gen release, 119 min
Iannucci manages to pack in all crucial elements of Dickens’s novel without allowing the slightest whiff of compromise. Of course, it feels hurried. But Armando’s great trick is to make that hurtling momentum a vital part of the experience. Only the dullest purist will object. Few unfamiliar with the source will be bored. The racially blind casting is very much in harmony with the author’s generosity. Patel is a great David, Swinton an even better Betsey Trotwood. Full review DC

The director of the ecstatically received Your Name returns with another touching animation. Powered along by the J-Pop of AKB48 and Gen Hoshino, Japan’s highest-grossing film of 2019 bundles the highs and lows, thrills and humiliations of teenage romance. The wacky mythology is offset with gorgeous hyperreal visuals, as raindrops bounce off umbrellas and puddles. With more than a nod to real-world climate change, Weathering with You clings to love in the face of rising oceans and environmental catastrophe. TB

Just Mercy is a splendidly old-fashioned legal drama with a real world Atticus Finch at its centre. Comparisons to To Kill a Mockingbird are apt and obvious. Upon arriving in Monroeville, Alabama, every white resident seems to ask the hotshot lawyer “from up North” (Jordan): “Have y’all been to the Harper Lee Museum?” There is much muttering when he takes the case of an African-American man (Jamie Foxx) wrongfully imprisoned for the 1986 murder of a white woman and sentenced to death. A gripping, dazzlingly acted and – yes – important drama unfolds. Full review TB

There are obvious comparisons between Waves and the similarly giddy and sneakily powerful teen soap Euphoria. Shults’s compellng third feature begins with Tyler (Harrison Jr), an over-achieving high school wrestler with a pushy dad and pregnant girlfriend. The heady atmospherics and soapy plot hooks coalesce into a fever dream and a tragedy. Suddenly the film changes gear. The second half concerns Tyler’s unassuming younger sister Emily (Taylor) and a blossoming romance with a classmate (Hedges). It’s a softer, emotional reckoning, one that is as cathartic and peaceable as the opening is euphoric and dangerous. Full review TB

Malick returns to form (if not his very best form) with this study of the Austrian martyr Franz Jägerstätter. Diehl brings dignity to the farmer who refused to sign an oath of allegiance to the Nazis in a film that showcases the director’s favourite techniques. Dialogue is as often voiceover as it is conversation. Scored to surging chords, the movie is alternately inside and outside the consciousness. It’s beautiful throughout, although the argument becomes repetive in the last hour. Full review DC