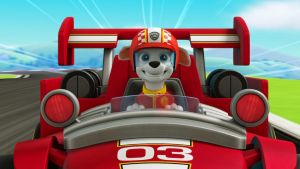 Writing in the Communist Manifesto in 1848, Karl Marx and Friedrich Engels noted that the bourgeois class must create ever-expanding markets to maintain its dominant and economic and ideological position, and that it must maintain “. . . over the whole surface of the globe. It must nestle everywhere, settle everywhere, establish connections everywhere”.

Thus, the proliferation of film sequels in late capitalist consumer society are part of the capitalist mode of production that exploits existing social relations.

Paw Patrol: Ready, Race, Rescue, a sequel to last year’s Paw Patrol: Mighty Pups, is a repository for positive incantations to provide unpaid labour and to do so without complaint or recourse to action. From a materialist perspective, this goes further than late capitalist exploitation: this is an unvarnished ode to serfdom and indentured servitude.

The first chilling Paw Patrol film begged the question: who will patrol the Paw Patrol? Now this new iteration negates all possibility for rage against the machine.

The Patrol’s incessant recitation of positive messages in the face of irrefutable political corruption steers the inhabitants of Adventure Bay, and in turn, the viewer, away from all deviation from the careful rehearsals required to maintain the bourgeois order, and away from what defines the most important events in history, those moments when well-rehearsed lines give way to contestation.

Faced with rigged races, chicken-led government, and the illusion of democratic choice, as evidenced by the grossly incompetent mayor and her overtly corrupt rival-in-exile, the pups repeatedly extol the societal rot: “Amazing,” they cry. Often it is as if they are reassuring themselves.

Their mixed messages parrot Vladislav Surkov’s concept of “sovereign democracy” and his absurd theatrical approach to contemporary politics, by which he will simultaneously fund human rights NGOs while supporting nationalist movements that regard NGOs as tools of the West. Choice is an illusion in Adventure Bay and the rule of law – as embodied by the Pups’ emergency services – doesn’t care who knows it.