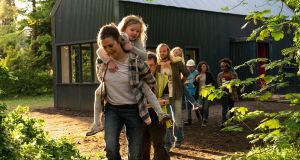 Herself stars Clare Dunne, who is alo co-writer, and is directed by Phyllida Lloyd. Photograph: Courtesy of Sundance Institute.

The Irish film Herself has premiered to breathlessly positive notices at the Sundance Film Festival in Utah. Mention has already been made of the 2021 Oscars.

Co-written by Clare Dunne, an established actor, and directed by Phyllida Lloyd, known for the hits The Iron Lady and Mamma Mia!, the picture tells the story of an abused woman who, frustrated by the Irish housing crisis, elects to build her own home on a friend’s plot of land.

Dunne plays the lead role alongside Ian Lloyd Anderson, veteran of Love/Hate, as her violent husband. Ed Guiney, Oscar-nominated for Room, and Sharon Horgan, the Irish actor and writer behind Catastrophe, are among the producers. Malcolm Campbell, who wrote What Richard Did for Lenny Abrahamson, collaborated on the screenplay.

The response from Peter Debruge in Variety, the most influential trade paper, could hardly have been more positive. The critic called it “head-and-shoulders the strongest of the 20 Sundance films I’ve seen so far” before going on to predict an Academy Award nomination for Lloyd. “Don’t be surprised if people are still talking about Herself this time next year, when Lloyd could be the sixth woman to break the Oscars’ glass ceiling,” he wrote (only five women have been nominated for best director at those awards).

We just premiered Herself at Sundance. The most wonderful response. Clare Dunne walked up on stage to a standing ovation. So unbelievably proud of her and Phyllida and the whole team. I’ve cried and laughed at many points along the way of making this film. And I cried again tonight watching the crowd stand for Clare. @hellomerman @elementdistribution @clare.dunnebear @variety

Writing in Screen Daily, one of Variety’s chief competitors, Fionnuala Halligan, mentioned “a stunning, taut performance from actor and co-writer Dunne”. Halligan compared the film positively to recent cinematic treatments of the Irish housing emergency such as Paddy Breathnach’s Rosie and Gerard Barrett’s Limbo. “Even though it tackles both domestic assault and homelessness, Herself is the most commercially viable of the three films to deal with the subject thus far,” she noted.

There was also a rave from the prominent website IndieWire. “Dunne, not well known to movie fans and better recognised for her theatre work . . . is a revelation here, a steady and emotive presence that anchors the film with a lived-in, wholly believable performance,” Kate Erbland wrote. Dunne, a Dubliner, has appeared at The Abbey Theatre and the Royal National Theatre in London. She recently received acclaim as Prince Hall in Lloyd’s all-female version of Shakespeare’s Henry IV at the Donmar Theatre.

“It wasn’t that I wrote it to make all these roles for myself,” Dunne told The Irish Times. “I wasn’t cracking into film as an actor. I was in love with cinema as a kid and I asked myself: ‘Do I really want to be in this industry?’ How much do I love it?’ And I knew my other way in might be writing.”

Established by Robert Redford, the Sundance Festival has, over four decades, maintained its reputation as the most prominent launching pad for independent cinema. Irish films such as John Crowley’s Brooklyn and John Carney’s Once began their journey to Oscar nominations amid the snows of Park City. “It’s a global stage for the best indie films,” Dunne said. “It’s an incredible honour to be there. Our premiere is in one of the biggest cinemas. It’s a huge, huge achievement.”

Other Irish co-productions premiering this year include Sean Durkin’s The Nest – like Herself, from Dublin’s Element Pictures – and Alison Ellwood’s The Go-Go’s, a study of that influential all-girl band. Herself will play as closing film at the Virgin Media Dublin International Film Festival on March 8th.

Ardal O’Hanlon: ‘I was always this weird, watchful kind of kid’
Real news has value SUBSCRIBE