The official trailer for The Turning, directed by Floria Sigismondi. Video: Universal Pictures 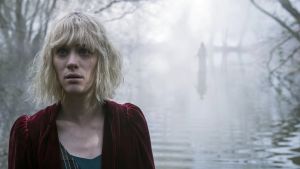 It’s generally seen as bad form to reveal anything about the end of a film. Happily, when it comes to the latest disembowelling of The Turn of the Screw, we have no end to spoil. It’s as if the editors set themselves the task of constructing a 94-minute film and, when that point was reached, turned off the machines and went home. The movie doesn’t quite stop mid-sentence, but it comes as close as any film I’ve seen. That can’t be it. Can it?

None of which is to suggest any sane person would wish The Turning 10 seconds longer.

I guess one of the themes of Henry James’s enduring novella is dislocation. A governess is sent to a gloomy isolated mansion to care for two peculiar children. Past outrages cause her to confront her own repressions. You know how it goes. You’ve seen Jack Clayton’s The Innocents and heard Benjamin Britten’s opera. But most of the confusions here are of a different stripe. Filmed largely at the Kilruddery Estate in Wicklow, the picture follows Kate (Mackenzie Davis) down a damp, leafy avenue to a crumbling mansion where she meets scary English housekeeper Mrs Grose (Barbara Marten). It comes as a shock when Miles and Flora (Finn Wolfhard and Brooklynn Prince), her young charges, turn out to be American. Are they visiting? No, apparently this is supposed to be the United States. If you are in any doubt, executive producer Steven Spielberg clears things up by dumping an American phone booth in an unmistakably Irish town (it could be Bray, but I can’t say for sure).

We begin with an announcement of Kurt Cobain’s death – as bold a signifier of 1994 as Neville Chamberlain’s bad news is of 1939 – but the film never explains why it’s bothered to go period-lite. It’s not as if a mobile phone is going to be of use against an eerie presence in the greenhouse. The nostalgic surge generated by the sight of a young woman labelling cassette inserts is not justification enough.

Then there are the incompatible acting styles. Davis is in contemporary horror mode. Marten is chewing Edwardian flats. Young Brooklynn Prince is rather wonderful in another film altogether. The co-star of The Florida Project, nine at time of writing, continues to display a startling capacity for naturalistic mayhem. What a shame she’s constrained within such a clunky construction.

Why bother trying to make sense of Floria Sigismondi’s “troubled production”? We know what’s going on. The studio is attempting to accommodate James’s story within the post-Conjuring universe. That means routine jump shocks that occur with such deadening predictability you could time an egg by them. It means fag-ash cinematography. It means routine ghost-train crones. It means the excision of all psychological nuance.

A total waste of time.