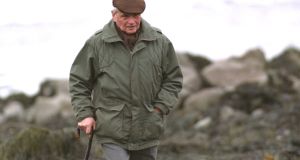 Nominations close in just over a week for the inaugural €10,000 Michel Déon Prize for the best work of nonfiction by a writer living in Ireland and the three most popular titles so far are Stacking the Coffins by Ida Milne; Notes to Self: Essays by Emilie Pine and Conflict, Peace and Mental Health: Addressing the consequences of conflict and trauma in Northern Ireland by David Bolton.

Other nominated titles to date include:

To be a Machine by Mark O’Connell

A History of the Future by Peter Bowler

The Cow Book by John Connell

The Doctor’s Wife Is Dead by Andrew Tierney

A Time to Risk All by Clodagh Finn

Ghosts of the Somme: Commemoration and Culture War in Northern Ireland by Jonathan Evershed

The Vanquished: Why the First World War Failed to End, 1917-1923 by Robert Gerwarth

An Army of Tribes: British Army Cohesion, Deviancy and Murder in Northern Ireland by Edward Burke

I Found My Tribe by Ruth Fitzmaurice

The Royal Irish Academy will choose the winner of the €10,000 prize, which is funded by the Department of Foreign Affairs and Trade. It is named after the French writer Michel Déon, who lived for more than 40 years in the west of Ireland. Déon died in Galway at the age of 97 on December 28th, 2016. He published more than 50 works of fiction and non-fiction. Horseman Pass By, his tribute to Ireland, was published by Lilliput Press shortly before his death. Two of Déon’s Irish-set novels from the early 1970s, The Wild Ponies and A Purple Taxi, won major French literary awards. The film adaptation of Un Taxi Mauve was shot in Connemara and starred Charlotte Rampling, Peter Ustinov and Fred Astaire.

Minister for Foreign Affairs Simon Coveney said the prize was “a very appropriate way to remember the great French writer Michel Déon, who spent so many years in Ireland.”