To Be a Machine review: can technology help us cheat mortality? 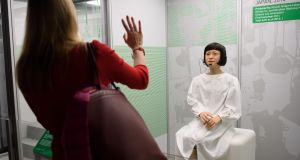 Human and android at the Science Museum in London. The fear is that superintelligent machines would destroy us, not through hostility but through indifference. Photograph: Carl Court/Getty Images

Book Title:
To Be a Machine: Adventures among Cyborgs, Utopians, Hackers, and the Futurists Solving the Modest Problem of Death

Philip Larkin’s poem The Old Fools considers people in the last years of life, suffering from dementia and sitting around “through days of thin continuous dreaming / Watching the light move.” Larkin wonders, starkly, “Why aren’t they screaming?”. In his first book, Dublin-based essayist and critic Mark O’Connell meets people who wonder the same about the rest of us. The subject is transhumanism, a movement that believes “we can and should use technology to control the future evolution of our species”: to enable us to live, perhaps, forever.

It’s not so strange to want to harness technology to cheat mortality; we have always hated our fragility and limited lives. “A man,” wrote Emerson, “is a god in ruins.” For Yeats, our souls are “fastened to a dying animal”. And don’t we already use technology – from spectacles to pacemakers – to augment our bodies? Andy Warhol, making his repeated silkscreen prints, said, “The reason I’m painting this way is that I want to be a machine.”

O’Connell is not unsympathetic to this view, having witnessed his wife going through childbirth. “I couldn’t help thinking the there ought to be a better system.” So he sets out to engage with the proponents of transhumanism, beginning with Swedish academic Anders Sandberg, who believes we can enhance human abilities through brain implants. But for all the thinking that Sandberg and his colleagues at the Future of Humanity Institute have done, their vision looks less like the grind of realistic progress than a movie montage sequence. “What would be a nice scenario is that we first get smart drugs and wearable technologies. And then life extension technologies. And then, finally, we get uploaded, and colonise space, and so on.” But, wonders O’Connell, is this really liberation, or a “total enslavement to technology”? If my brain becomes an electronic emulation of itself, am I still me?

Another key transhumanist is Max More, an Oxford-educated philosopher who runs a life-extension facility in Arizona, where people have their bodies or heads frozen pending a future when superextended life will be possible. More is not his real name: it was O’Connor, but he changed it, either – depending on which of his accounts you prefer – “to encapsulate the essence of what my goal is: always to improve” or “to remove the cultural links to Ireland [which connote backwardness rather than future-orientation]”. More admits that a cryogenic future is not perfect, but being a brain in a vat is “better than the alternative”. Is it? Or might the prospect of spending eternity in conference with blowhards like this mean that the living would envy the dead?

As well as making people more like machines, O’Connell also explores the reverse: artificial intelligence (AI), and how computers can mimic humanity. This is harder than it looks, as anyone who has tried to interact with a chatbot will know. Computers are very good at processing information at superhuman speed, but not at the unpredictable movements of thought that consciousness requires. Even in physical terms, it remains difficult, as O’Connell witnesses at a robotics fair in California, to make robots perform even basic human actions. “You would be surprised how difficult it is to solve the problem of hugging,” confides one exhibitor.

Nonetheless, AI is much less a fringe concern than pure transhumanism. The US government has been investing in biohybrid research – creature-machine crossbreeds – since 1999. Moreover, AI has attracted alarm from figures such as Bill Gates and Stephen Hawking, who warned that while the development of AI “may well be the biggest event in human history”, it could also “be the last, unless we learn to avoid the risks”. The risks are better known as the Singularity, the point (currently estimated to arrive within 30 years) when technological intelligence will become so advanced that humanity will essentially be obsolete.

But job losses, through for example driverless cars, are the least of it: the fear is that superintelligent machines would destroy us, not through hostility but through indifference. As AI safety theorist Eliezer Yudkowsky puts it, “The AI does not love or hate you, but you are made out of atoms it can use for something else.” (A facile example would be a machine told to eliminate human cancer, which it does by eliminating humans.)

O’Connell meets people who genuinely believe that they are more likely to be killed by a superintelligent machine than by a disease. Why aren’t we screaming? On the plus side, AI would be the last invention we ever need to make, thereafter delegating further inventions to machines that can do it infinitely better than us. We would enter “a state of permanent Copernican revolution”.

To Be a Machine is not only a report of a particular future but a psychological assessment of those seeking to bring it about. The field attracts people who seem unhappy in their skin (literally), who do not understand that the meaning of human life is “inseparably bound up with birth, and reproduction, and death”.

For Max More, who has searched the major spiritual options for meaning, technology has replaced religion. Later we meet Tim Cannon, with a history of alcoholism and attempted suicide, who once had an experimental device implanted in his arm without anaesthetic (“that was a rough ninety days, I’ll tell you that much”) and who decides not to have more children so as “not to participate in the problem any more”. Human life is the problem, technology the solution: except that the infinite human life they envisage is really an end to human life. “What they were interested in as liberation,” says O’Connell, “I found it difficult to see as anything other than annihilation.”

O’Connell is an efficient host and curator, packing so much into a slim book that you might suspect some supernatural technology to be at work. This makes To Be a Machine essential reading on a subject you didn’t know you needed to be worried about. Should we be more frightened of what the future holds, or of the people bringing it to us? “Well,” as Larkin recognised in The Old Fools, “we shall find out.”

The untold story of River Phoenix, 25 years after his death
5 Welcome to the child sex capital of Europe
Real news has value SUBSCRIBE