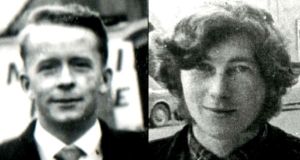 Michael Naan (left) and Andrew Murray: were knifed to death by Sgt Stan Hathaway of the Argyll and Sutherland Highlanders in 1972.

When the British government decided to deploy troops on the streets of Belfast and Derry in August 1969, the role initially envisaged for the army was “peacekeeping” or holding the ring between what many British people saw as two warring Irish factions. That optimistic aspiration rapidly unravelled, and for most of the next three decades the army was engaged in a kind of counterinsurgency, if not (as many soldiers thought) actual warfare.

Operation Banner – which was not formally wound up until July 31st, 2007 – became the longest campaign in British military history. As Fintan O’Toole put it that day in The Irish Times, the army had been “a player not a referee”. The presence of combat-ready soldiers on UK streets was jarring at many levels, not least that of the soldiers themselves – as one officer put it, “the topography is exactly as you recognise it at home. Yet you have a rifle in your hands”. His men persistently asked, “Am I really right to be doing this between WH Smith and a Marks and Spencers?”

The government sent troops in without, itself, having a full grasp of the nature and limits of military force, and without ever establishing a clear definition of the army’s mission. The army always complained of this “lack of a strategic vision”, and also of the failure to set up a single authority commanding all security forces (a step seen as having been crucial to the successful counterinsurgency in Malaya).

In Northern Ireland it was formally restricted to “military aid to the civil power”, its actions limited by the rules of the famous “yellow card”. The army’s own final assessment held that, although any simple notion of military “victory” was politically irrelevant, its deployment made possible a political process free of undue intimidation. But without doubt there were, along the way, all too many military actions that were politically and even militarily counterproductive.

It has always been clear that the British government took a big risk by committing the army to the streets of  the Six Counties. The question whether the risk was justified has usually been debated at the political level; the army’s military qualifications have been taken for granted.

In An Army of Tribes, Edward Burke poses a less familiar question – was it the right kind of army for the task? Did some of its fundamental characteristics perhaps predispose it to counterproductive responses? Might for instance its much-prized regimental system, widely seen as a key to its effectiveness, lead to illegal actions?

On top of the obsessional self-regard cultivated by almost all regiments, the Argylls had developed a self-image as 'players', hard men, who enjoyed 'welting people over the head'

He focuses on one particularly gruesome instance, the double murder of Michael Naan and Andrew Murray in south Fermanagh in October 1972. Both were knifed to death by soldiers of the Argyll and Sutherland Highlanders in an operation whose purpose has remained obscure, not least because there was no investigation of the incident until 1979, when Sgt Stan Hathaway admitted to the murder.

Naan was a Catholic and a nationalist, heavily involved in the civil rights movement. There was no evidence that Naan was a member of the IRA, though, except that he was identified as such by the local Ulster Defence Regiment, who even accorded him the key role of quartermaster – “involved in everything that went down here”. Information from the UDR was unlikely to be impartial, but the Argylls chose to take it at face value.

They seem to have been observing Naan’s farm, but quite what Sgt Hathaway and his three men expected to find as they approached it on the evening of October 23rd is not clear. At the entrance they encountered Naan’s farmworker, Andrew Murray, and made him lie on the ground. Hathaway handed his rifle to another soldier before confronting Naan in his byre; according to his later account Naan told him “he knew people who were quite capable of knocking off troops” (maybe an odd thing for an IRA quartermaster to say). He then knifed the farmer in the stomach. After he “died on me”, Hathaway went out and, with the help of his men, killed Murray with the same knife.

Why? Was Hathaway a “rotten apple” (the term often used in the army to explain moral lapses)? Burke contends, on the contrary, that he had been an exemplary soldier, a stickler for the rules. For him the problem was not Hathaway’s character, but the character of his “tribe”. On top of the obsessional self-regard cultivated by almost all regiments, the Argylls had developed a self-image as “players”, hard men, who enjoyed “welting people over the head”. They had been commanded by “Mad Mitch” in Aden and carried many of his attitudes along with them.

Recruits to the regiment “hyper-invested” in its traditions and honour, to the exclusion of any other standards – including, Burke suggests, the wider interests of the army itself.

The result was what he calls “deviant cohesion”, not simply putting group solidarity first but allowing the group to pursue its own agenda – and to cover up any untoward results. This, in a situation where an Argyll soldier had gone missing, and was possibly in IRA hands, was enough to precipitate the deadly attack.

Burke’s close analysis of military organisational structure and dynamics, which started life as an academic thesis, is a substantial piece of research. There is a mass of detail here (the list of abbreviations runs to more than three pages, and even so is incomplete) but it is leavened by the author’s humane intelligence, coupled with a strong topographical sense.

Five years before writing the book, Burke walked the 303 miles of the Border for charity, and he evokes its atmosphere vividly. The precise location of Naan’s farm near the village of Newtownbutler forms a key part of his account: as a Catholic occupying a big (90-acre) holding once owned by a Protestant, Naan challenged a very finely balanced local equilibrium. Burke contests the republican allegation that all Scottish regiments were anti-Catholic, but – like many others – the Argylls came to see the Catholic population as “the enemy”. The results here were catastrophic.